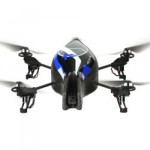 While we won’t be on the floor of CES until tomorrow, the internet is already on fire with buzz surrounding the Parrot AR.Drone remote control quadricopter that is controlled by creating its own WiFi network that either an iPhone or an iPod Touch connects to. The Parrot AR.Drone is then maneuvered using the accelerometers of the iPhone combined with a video feed from the forward facing camera on the drone itself. 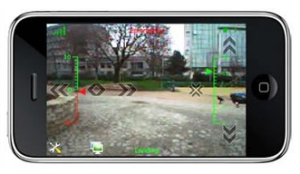 A smart piloting system intelligently compensates for wind and other environmental conditions, and utilizing a second camera which faces the ground can perform a flawless stationary flight on its own. If at any point you take your fingers off the iPhone autopilot engages stabilizing the drone, and if you quit the controller app or lose your connection to the Parrot AR.Drone’s WiFi network the drone will stabilize itself and land all on its own.

As seen in the following video, the Parrot AR.Drone has two different hulls– A fully enclosed hull that protects the rotors from bumping in to walls and furniture indoors, and a hull for outdoors that sacrifices rotor protection for better maneuverability.

As if being able to fly around a drone using nothing more than your iPhone wasn’t cool enough, an additional video on the Parrot AR.Drone web site demonstrates some augmented reality games you can play with the Parrot AR.Drone complete with picture in picture showing what the video feed and in-game HUD looks like. It apparently can even recognize shapes in 3D space to overlay different 3D models, such as the boss fight seen at the end of this video:

On top of all this, Parrot even has a developer zone featuring whitepapers that detail how to develop third party games that use the Parrot AR.Drone via an open API. All of these resources are available for free, and while the games shown in the above video were cool, I can’t even imagine the potential if third party development support takes off.

Needless to say, we’ll be keeping a close eye on the Parrot AR.Drone, and will post more information as it becomes available.