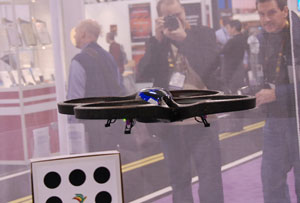 Back in January, we got pretty excited about the Parrot AR.Drone Quadicoptor. The Parrot AR.Drone remote control quadricopter is controlled by creating its own WiFi network that either an iPhone or an iPod Touch connects to. The Parrot AR.Drone is then maneuvered using the accelerometers of the iPhone combined with a video feed from the forward facing camera on the drone itself. A smart piloting system intelligently compensates for wind and other environmental conditions, and utilizing a second camera which faces the ground can perform a stationary flight on its own.

We had some hands-on time with it back at CES, and were impressed:

Of course, the big question on everyone’s mind was “when" and “how much". Ars Technica reports that the Parrot AR.Drone will finally go on sale this September at a price of $299. The device itself is only so exciting on its own, but combined with its open SDK, Parrot is hoping that developers will take advantage of the device’s controls and cameras to create augmented reality games. At least a couple of these titles are said to be available at launch.