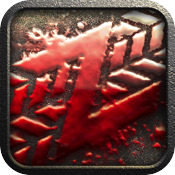 The human intellect is a remarkable beast. Just when we think that all possible Zombie concepts have been duly wrung out from our collective minds, developers renderPaz go and throw us a curve-ball. Picture this: you’re driving down the post-apocalyptic interstate, weaving through abandoned vehicles strewn everywhere– when you see a hitch-hiker. Naturally, this being post-apocalyptic America, the rule of thumb (think Zombieland) is to just keep on driving. In Zombie Highway [99¢] you aren’t afforded that luxury.

The object in Zombie Highway is to just keep on driving– pedal to the metal, you have only one speed– faster. That’s not to say you’re get very far, as zombies don’t generally take kindly to your brains being cocooned inside an SUV’s hard exterior. And unlike the variety in Zombieland, these zombies are willing to work to get them. 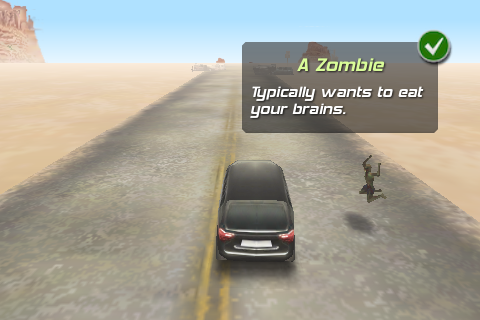 Zombies in Zombie Highway will pounce on your car’s side rails as you speed past them, doing all they can to bring the car to a stop– generally by using their superhuman undead strength to wrestle it till it topples over. There are 7 types of zombies all up, from the skinny fledgling variety, to the stronger, health-regenerating, weightier monsters that do a world of hurt to your center of balance. As zombies stack up on one side, this is only compounded, with your only recourse being to get the buggers off as quickly as possible. 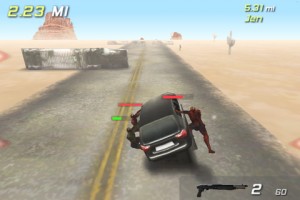 Fortunately, your own driving prowess and an arms dealer friend in the back provide all the tools you need to get through the zombie horde…at least for a couple of miles. Zombies can be exited from the vehicle by tilting your device to sideswipe them onto one of the many ruined cars littered across the highway. Each zombie has a health bar, and whittling that to zero will ensure they won’t be sticking around. To help, your aforementioned friend riding shotgun (ho ho!) has a formidable arsenal that is gradually unlocked as you accumulate collective mileage across all your games. Weapons are fired by touching the corners of the screen– if a zombie is on the right near the front of your car, tapping the top right area will fire at it.

It’s a straightforward formula that creates a fun and remarkably gratifying zombie slaying experience. It’s also quite challenging, as zombies are super aggressive, and your car’s physics are fantastic. For instance, don’t expect to steer out of a lean by driving the other way– it’ll only tip it further. Instead, a bit of load balancing and fast firing fingertips are required to keep the rubber on the road.

Our only gripes with the game are that for all the great 3D models and presentation there is a notable lack of any real sound effects. Your car is effectively muted until it’s being weighed down, and then the creaks it makes are whisper quiet. Not hearing the engine at all detracts from the experience dramatically. In fact, the only sound you’ll really hear from the car are the squeaks of your tires as you slide around the road. There is absolutely no music to be found either, which would have done a world of good to further build atmosphere and character.

We’re also not quite sure why the developers didn’t stick with Openfeint or a similar platform for its social functions, as their current Twitter implementation is rudimentary at best. And though the Facebook option results in a neat competition feature where you can track your friends, those who keep their gaming separate from Facebook are left on the curb. Thankfully neither of these platforms are required to access high scores.

Still, it’s hard to stay disappointed with these drawbacks for long because running from hordes of zombies is just so much fun. The further you get, the more obstacles are thrown in your path, until you are eventually wrestling your device to fend off zombies, dodge roadblocks and keep your SUV from going belly up as you’re two wheeling back and forth. It’s a singular experience seemingly lifted right from classic zombie films and as such is effortlessly recommended. We just hope the developers look at the sound issue, as well as maybe add an achievements system ala Monster Dash [99¢] to pad out the survival game replayability.