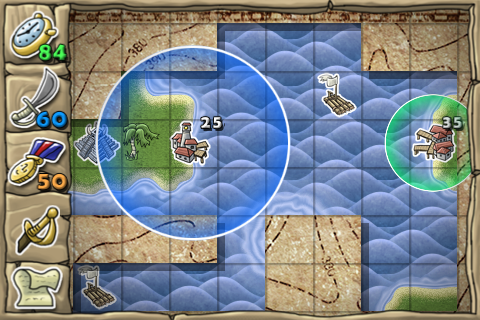 Last week, in a post featuring new screenshots from the upcoming iPhone version of Riven from Cyan Worlds, we pointed to clues of a new, previously unheard of forthcoming title spotted on the studio’s website. At the time, all we saw of Stoneship (named after an age from Myst) was an ad banner commanding, “Never let your timbers be shivered!" and a tiny screenshot. Today, Cyan shared with Touch Arcade exclusive details and screenshots to help give readers a feel for what Stoneship is all about.

The upcoming Stoneship represents “a lighthearted new direction" for Cyan Worlds, the studio indicates. The game is a casual, top-down, turn-based, strategy puzzle game “with a bent toward the whimsical," we’re told. The game sets you and your first mate on the high seas, charged with exploring, controlling, and protecting vast oceans and islands, under continual threat of a pirate siege. There are eighty three included levels to play through, with additional levels to come later, it appears.

Granted, there’s still room for gameplay specifics and other details on this one, but what we’ve got does paint an overall picture. And the screenshots provided us should help flesh out that picture, further.

Cyan plans to submit Stoneship to Apple in the next few weeks and, as well, confirms that Riven for the iPhone is still on track for a release this fall. We expect to post a full review of Stoneship coincidental with its release in the App Store. Stay tuned.