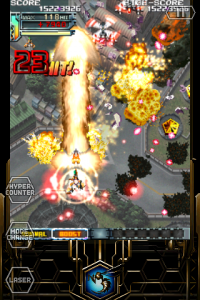 Earlier this month we brought you a preview of Dodonpachi Resurrection, the newest bullet hell shooter for the iPhone from developer Cave, who have previously brought Espgaluda II [$8.99/Lite] to the App Store. Dodonpachi Resurrection is a reimagined version of the arcade game Dodonpachi DaiFukkatsu, the fifth game in the Dodonpachi series. Resurrection will feature a mode faithful to the arcade game as well as an entire mode unique to the iPhone version. Due to all of the action that can take place onscreen at any given time, the game is restricted to owners of the iPhone 4, iPhone 3Gs, 32 and 64 gig 3rd gen iPod touches, and the iPad.

Cave has sent word via press release and their official Twitter that the release date for Dodonpachi Resurrection is August 26th and that it will be launching for a special introductory price of $4.99. This introductory price will last for the first four days after release and then rise to the regular price of $8.99.  Additionally, a lite version will follow after the full game is released, although no date for the lite has been specified.

Here is another look at the latest trailer: