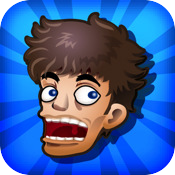 By now I’m sure we all agree, Chillingo really have a soft spot for decaying dudes with a bad case of halitosis. They are Liches of the App Store, raising an undead army to swarm your iOS devices. For the most part, this is actually a good thing, as all their zombie offerings to date have been of a particularly high standard. So it’s no surprise that they’ve championed Viqua Games’ Zombie Escape [App Store], a game we were eagerly anticipating after our hands-on preview.

Zombie Escape takes the traditional line drawing experience and changes up the formula significantly. Rather than being the be-all-end-all of the game, where one misplaced line means instant death, the line-drawing mechanic is a means to an end; namely, directing survivors of the zombie infestation to a nearby chopper, filling it up, and waiting for the next to arrive. Sure, while your task each level might be rescuing each and every survivor, the zombies have to eat something right? 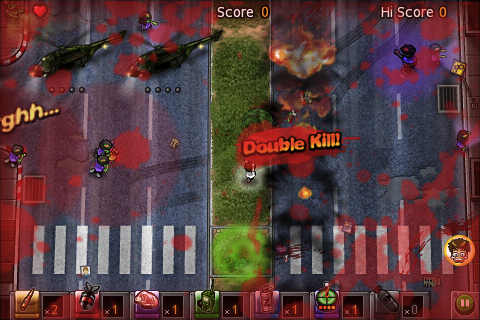 In this respect, Zombie Escape is a lot more forgiving than other line-drawing games, by allowing some casualties before outright failure, and permitting your survivors to fight back a little; in the form of a small window of opportunity for you to direct a survivor away if they are caught by a zombie– before their brains are eaten. This doesn’t mean a less challenging game, but that the difficulty assumes a different form– something you’ll appreciate when your screen is bursting with zombies and you’re trying to thread your survivors through the most narrow of openings, all while avoiding your own airstrike.

The artillery at your disposal is crucial to staving off the zombie horde for as long as it takes for your lift-off to arrive. There are 7 items available to you, each unlocked as you work your way through the 28 levels and three different settings in the campaign mode. Items are peppered in-game through crate drops, covering the gamut of usual suspects; such as sniper rifles, bombs and airstrikes; as well as a few items unique to Zombie Escape such as the SOS helicopters, sleep grenades, hunks of meat (which attract zombies) and zombie-free tesla-coiled zones, the latter of which have a more utility role. Each item can be upgraded in different ways, some of which alter their purpose entirely, adding to its strategic value. 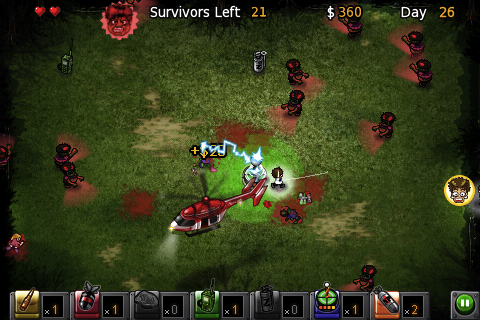 As well as your armament to consider, there are also varying zombie types which compound the danger your survivors are in. These include; a Seeker, which hunts your survivors down when in range; a Stinker, which leaves a toxic cloud behind it when it dies; and a Burster, a zombie that explodes after it is killed. Each of these super-zombies is more than capable of dispatching a hapless survivor in no time, so careful management of your survivors pathing and wanton destruction with your items is required. Oh, and carefully aim your SOS chopper pick-ups to land on a horde of zombies– it has the desired effect.

The level art in Zombie Escape gets the job done and is different across the 3 game worlds. Where Zombie Escape shines however, is in its 2D art, as all the zombies and survivors look great and are believably animated (I warmed especially to the survivors running around waving their arms above their heads). Unfortunately, I encountered a bug where the game’s sound effects never worked for us, until I tried turning off and on the sound effects in the game menu a couple of times. Once I did, I was pleasantly rewarded with terrifying shrieks and groans that really helped sell their plight to us. Hopefully this bug will be addressed in a future update.

Zombie Escape’s campaign missions are all driven by either the items available or the zombie types; you are frequently restricted to certain items to create a greater sense of strategy and difficulty, particularly in the later levels. The other tact that levels take are to throw at you large numbers of specific zombie types, a challenge that requires a combination of items and dexterity to keep your survivors alive. I was disappointed to see that Zombie Escape doesn’t appear to support multi-touch, a feature useful in a game like this, though it never really became noticeable until the very last levels where micro-managing your survivors is essential.

With a further endless Survival game mode and the usual suite of achievements and high score tables provided by Chillingo’s Crystal platform, Zombie Escape is certainly at the forefront of line-drawing games; up there with the likes of Boom Brigade in providing a guns-blazing, action-packed take on the formula. This one should provide for both line-drawing fans and action fans in general, as the pacing is good and the game notoriously difficult to put down. The couple of hours required to take down the campaign mode and the endless Survival mode should keep zombie-lovers entertained– just be sure to fiddle with the sound settings if you encounter the same effects bug I did.