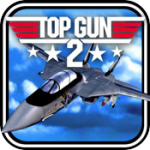 Yesterday we showed off some screenshots of Top Gun 2 [$2.99], the Freeverse developed sequel to last year’s Top Gun [$1.99/HD] iPhone game based on the the hit 80’s movie. The screens looked really nice, and being rather fond of the first game I was really looking forward to Top Gun 2. After spending the last couple of hours with the game however, I’m fairly disappointed. While the visuals in the game are a pretty big improvement, most of what I liked about the first game is gone. It isn’t necessarily a bad game, just more of a step sideways than a step forward compared to the first game.

The first thing that struck me as odd about Top Gun 2 is that there’s no title screen. The game boots up with the Top Gun logo and familiar music, and then sends you right to an overhead map. From this map you can choose to go to an aircraft carrier to upgrade any of the 3 available planes, or choose a jet icon to enter the first mission. There’s nothing that explains any of this, nor is there any help screens in the options menu or anywhere else that tells you how to play the game. Granted, the map options are easy enough to figure out on your own, but if you aren’t already familiar with the gameplay from the first Top Gun then you might have a hard time finding your way here as there’s no tutorial. 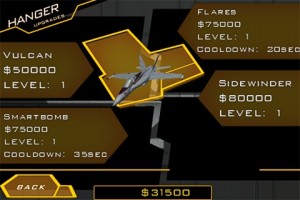 Another thing missing is any kind of progressive story, aside from a small blurb generically explaining what you are doing before each mission. It doesn’t feel like a cohesive experience, rather just a collection of missions to play with nothing to really tie them together. I imagine this was intended to streamline the game, but it ends up making it feel disjointed and hollow instead. In essence, Top Gun 2 feels like a no frills arcade game where the focus is on scoring and chaining together combos in a series of dogfights and boss battles.

The gameplay in Top Gun 2 is pretty good, but it leaves out some of the aspects that I enjoyed from the original. Controlling your craft works the same by tilting the device, and you have the same vulcan cannon and lock-on missiles, but there are a couple of cool additions as well. Each of the 3 jets (the F-14, F-16, and F-18) have their own unique weapon and special move, like a barrage of missiles, a speed boost, or a shield. All of the different functions of each plane can be upgraded using money earned during missions. Gone are the “danger zones” of the first game, which seems more realistic but makes it hard to tell where you are getting shot from. I actually enjoyed that part of the original game and thought it was fun to be aiming and shooting at enemies while dodging incoming fire from these danger zones.

Top Gun 2 isn’t terrible by any means, but it just may not appeal to people who enjoyed the first game. The planes you can fly are awesome, and I enjoyed the upgrading aspects. The missions are also chock full of action, and there is some satisfying arcade-style dogfighting to be had. But the game lacks soul and personality, and with no real storyline or any kind of tutorial to guide you through the game, it diminishes the overall experience. If you’re just looking for some frantic jet fighting action, you may enjoy Top Gun 2, just don’t expect much beyond that.