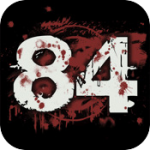 When playing games or watching films, I’m not typically the type to get scared. Those surprise moments that are designed to make you jump don’t even draw a flinch from me, and horror movies in general usually elicit more laughter than fear. So I was certainly taken aback when I found that a little iPhone game, Prisoner 84 from Hidden Games to be exact, actually had me on the edge of my seat with paranoia due to its unsettling atmosphere. As far as gameplay is concerned, there’s nothing utterly mind blowing as on a whole it’s rather simplistic, although certainly above average. But based on the overall feelings Prisoner 84 can invoke and how well suited to the iPhone it is, it’s an experience that really captures your imagination.

The game takes place on an offshore prison where you play as prisoner 84. You awaken in solitary confinement to find that everyone in the prison is either dead or has become some form of undead. Gruesome and disturbing images wait for you around every corner. Your goal is to escape the prison, and along the way find out about your past and why exactly you’ve been sent to this prison. If you were to judge the game based on screenshots alone, you would likely not be impressed. The character models are blocky and lack detail, but for good reason. Every enemy has a complete skeletal structure underneath their outer skin and clothing. So blasting away at them will slowly chip off pieces of their flesh, exposing parts of their skeleton until they’re finally put down for good. It’s a really satisfying and neat effect, but at the expense of detailed character visuals. 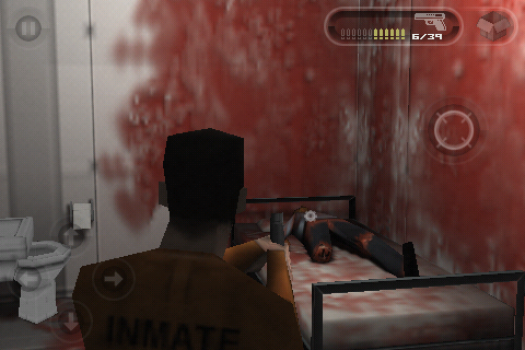 The environments are a different story, and are what really makes Prisoner 84 shine. The standout feature is the lighting system, which creates a stark contrast of shadows throughout the game. Every light source reflects accurately on prisoner 84 as he makes his way through the maze-like prison, and the lighting does wonders to make you forget that the character models are less than stellar. Of equally high quality is the sound design, and while there’s no music playing during the game, the soundtrack is comprised of haunting audio effects that fit the game perfectly. Distant moans or mechanical banging will come out of nowhere, and footsteps change from sharp and echoing to sticky and gross as you walk through a trail of blood. 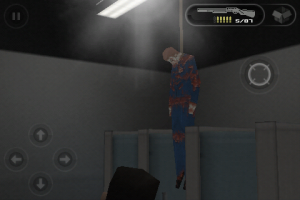 This exceptional atmosphere that Prisoner 84 creates would be nothing without gameplay to go with it, and the game delivers fairly well on this front. From a third-person perspective, you control 84 with a small d-pad for movement and swipe the screen to aim. The d-pad is serviceable, albeit kind of funky, but the swipe to aim is nearly flawless. 84’s movement is deliberately slow, but a quick double-tap of the forward arrow makes him move at a faster pace. There’s a single button for firing your weapon, and a context sensitive button that will appear if you are next to something in the environment that can be interacted with. An inventory button resides in the upper corner and takes you to a screen where you can keep tabs on the puzzle items you’ve obtained and the weapons, outfits, and other collectible items that are in the game.

One of the things that really draws you into Prisoner 84 is the minimalist approach to the UI and other traditional game elements. There’s no aiming reticule, rather where the barrel of your gun points is the direction you’ll fire. Also there isn’t any life indicator other than your character’s diminishing appearance as he has damage inflicted upon him. Other nice touches really make you feel as though you’re playing the game through 84’s perspective, like actually touching and dragging a security card through a terminal or placing a key in the keyhole and turning it to unlock doors and lockers. Some may call this gimmicky, but to me it’s a refreshing change from the by-the-numbers approach of similar games, and shows some ingenuity on the part of the developer for making the most of the touch screen interface. 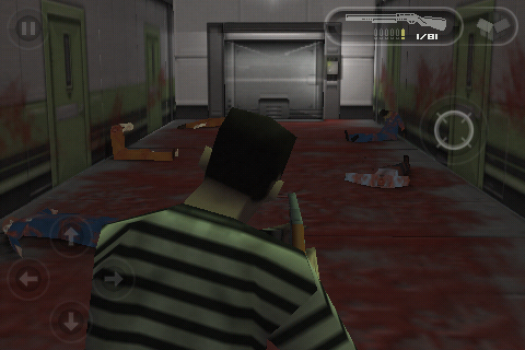 With all my praise for Prisoner 84, it certainly does have drawbacks. I can accept the low poly characters since it allows for the skeletal damage system, as well as ensuring the game runs smoothly on all devices, but they do stick out like a sore thumb. The puzzles in the game are really basic, mostly consisting of collecting an item that has an obvious use later in the game. And as far as enemy AI is concerned, well, it barely exists. You can be blasting away at a baddie, with another a mere couple feet away that stands like a statue as if nothing were going on right next to him. But the game’s focus is squarely on exploration and discovery, with the combat and puzzle elements taking somewhat of a backseat. In this way Prisoner 84 still succeeds as an enjoyable experience in spite of the negatives.

In regards to the horror game genre, Prisoner 84 really nails the important points, which is mainly a bone chilling atmosphere. It’s certainly not the greatest action or puzzle game there is, but the exploration factor is truly compelling. As such, it certainly won’t appeal to everybody, and I know for a fact that some people just don’t dig these types of slow paced games. But for me, it’s one of the most interesting and unique experiences I’ve had on the iPhone, and the comments in our forum are overwhelmingly positive. The fact that the entire game was created by a two man development team makes it all the more impressive, and they obviously have a very clear vision of what games like this are supposed to be like. Quibbles aside, Prisoner 84 offers a great amount of entertainment for the price, and proves that you don’t need a big screen or a big budget to bring a scary good time to players.