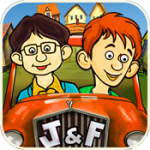 Back at GDC we sat down with the guys from 99 Games who showed us an early build of The Jim and Frank Mysteries – The Blood River Files [99¢] which has since been picked up by Chillingo and arrived on the App Store. If you’ve played a Professor Layton game on the Nintendo DS before, The Jim and Frank Mysteries is a shockingly competent Layton lookalike with the professor and his sidekick Luke replaced by Jim and Frank, a team of teenage boys sent off on a quest by their grandfather as part of an odd 15th birthday celebration ritual.

Gameplay is identical to that of the Layton games in that Jim and Frank set out on a strange adventure, moving from screen to screen, talking to the various inhabitants of the game world, and solving 60 unique puzzles. Instead of the “hint coins" found in Professor Layton, Jim and Frank have “eurekas" which are similarly hidden in the game world and are collected by tapping on them. These eurekas are used as an in-game currency of sorts, which explains why Jim and Frank’s adventure only costs a buck. 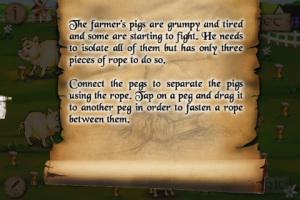 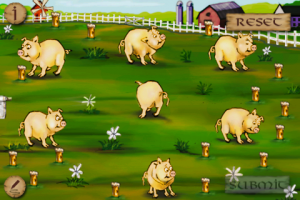 If you get stuck on a puzzle, you’re able to unlock hints which will only cost you one of your eurekas for the first hint, and an additional eureka for the second. If you’re still stumped, you can skip a puzzle entirely at the cost of many more eurekas. Of the two puzzles I’ve tried to skip, the first one would cost 15 with 20 required to skip the second. Aside from finding them in the game world, eurekas are currently available as an in-app purchase with 30 for 99¢, 75 for $1.99, and 120 for $2.99. Of course, if you’re good at puzzle games, these are entirely optional and you could complete the entire game without burning a single eureka. 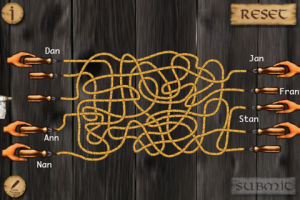 The included puzzles are your standard array of math and logic puzzles which you’ve undoubtedly encountered before somewhere, either in various childhood brain teaser books, similar video games, and other places. Old standbys such as figuring out how to separate liquid to a certain amount using three differently sized containers, sliding puzzles of all types, mazes, map puzzles, and others are all there. I’ve yet to come across a puzzle type that felt unique to this game, but as a veteran of the Layton series, that doesn’t come as much of a surprise.

Mixed amongst the puzzles are several different mini games. For instance, the first one begins when you come across a creepy old man in the middle of the woods who needs help chopping wood. Naturally, this team of teenage boys fulfill the old man’s desires and begin chopping away in a reaction-based mini game where you tap the screen to chop as a log scrolls from right to left. These mini games are fairly simple, but serve to offer an even wider variety to the things Jim and Frank will need to do on their adventure. 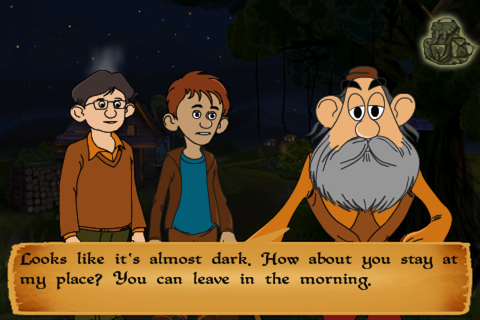 Jim and Frank includes some limited voice overs, which take over during important parts of the game. The whole beginning of your adventure is narrated, and as far as iPhone game voice work is concerned, it really isn’t half bad. The story is silly as you would expect, with dialog that often left me raising an eyebrow. When we talked to 99 Games back at GDC, they seemed excited for the Jim and Frank Mysteries to continue past this first installment, so with any luck there will be many more mysteries for the teenage duo to unravel in the future.

Regardless of how you feel about the incredible similarities between The Jim and Frank Mysteries and Professor Layton games, we’ll likely never see Layton on the iPhone, so a highly “inspired" game is just as good in my book. The amount of content included in Jim and Frank borders on ridiculous at its current launch price of a dollar. With hours and hours of gameplay (99 Games claims over 20), 60 puzzles, 8 mini games, and a cast of nearly 30 characters, this isn’t a game you should miss.

Sure, it would be easy to get wound up over the in app purchases to buy eurekas, but these are entirely optional especially since it wouldn’t surprise me if the Jim and Frank thread on our forums quickly turned in to a great place to go for when you get stuck in game.