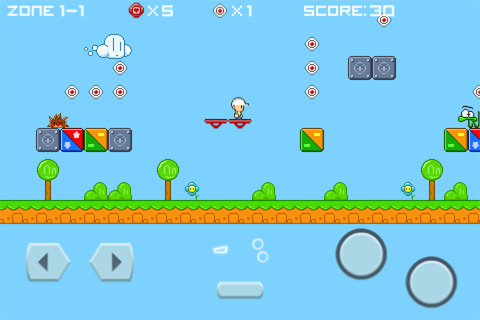 Here’s one for all the platformer fans out there. Alessandro Andriani has recently released Omino [App Store], a cute little retro-inspired platformer with a look reminiscent of Super Mario Brothers on the NES. It features bright colors, simplistic “8-bit" graphics, and a rather primitive chiptune soundtrack that all come together to pretty much achieve the developer’s stated goal of taking you back to the ’80s. 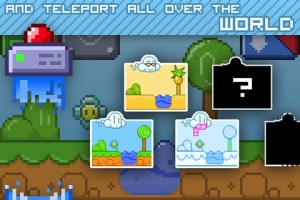 In fairly standard platformer fashion, the goal in Omino is to safely get from start to finish across various levels filled with platforms, obstacles, power-ups, and baddies — some of which can be stomped, while others (the spikey ones) can’t. Along the way you find coins to collect and power-blocks that, when hit with your head, may reveal red or blue hat power-ups that, when worn, allow you to shoot at your enemies (red) or walk on water, and faster than normal (blue).

The game makes use of left / right touch arrows and on-screen fire buttons for jumping and shooting. In my first few minutes with Omino, I found the game hard to control due to the speed of the on-screen character, which made things feel a bit over-sensitive. After about 20 minutes playing, however, I got used to the controls and they became a complete non-issue.

Omino is a free download that comes with the first two levels, with the rest of the game zones available in a single in-app download at a price of 99 cents. Anyone who enjoys old-school platformer action should give this one a try.