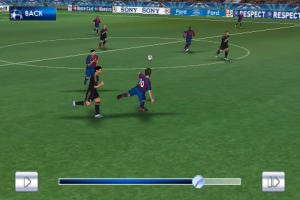 Konami’s much anticipated PES 2010 for the iPhone has arrived internationally. We’d previewed the game based on the developer’s blogs describing the control system they were working on for the game.

The game has been released to non-U.S. countries. No indication yet when the U.S. release is coming.

Here’s an early gameplay video run on an iPhone 3G:

We’ll have a closer look shortly. Meanwhile impressions can be found in our forums.