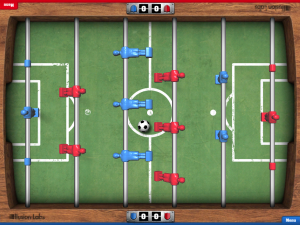 One of our favorite iPhone developers has long been Illusion Labs. This indie development group has been responsible for iPhone classics such as Labyrinth (1 and 2) and Touchgrind. We also particularly loved Sway, even though it might not have seen as much commercial success as their other games.

The reason for our praise of their titles is that they perfect their games around an iPhone-specific control system and package them in a high quality product. Their newest game follows this model and brings the game of foosball to the iPad.

Focused around a multi-touch interface, the Foosball HD allows two players to compete with each other on a virtual foosball table. Each player has control of their respective players and can move their men using simple swipe controls. Forward and Back move the players horizontally on the field while Left and Right spin them in the appropriate direction. A single player mode is included but the real magic in the game is playing against a human opponent.

They took some liberties in cutting down a real life foosball table to fit it on the iPad, but the end result can be quite fun when playing against another human opponent. The above video shows Blake playing Jared, then Anders playing Jared.

Illusion Labs has already submitted Foosball HD so it should be coming out any day now.