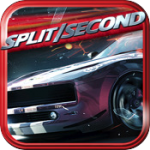 Developed in house utilizing scaled down versions of the assets from the XBOX 360 and PS3 version of the game, Split/Second for the iPhone is a fun racing game with a great sense of speed and a cool gameplay mechanic that involves blowing up portions of the track to change the layout of the course and sabotage opponents.

In Split/Second, you compete in a fictional reality television show where you compete for fame and fortune. Included are three gameplay modes: Season mode where you play through the TV show, quick race where you can play any unlocked track, and multiplayer mode which not only can be played locally via bluetooth and WiFi but also online. 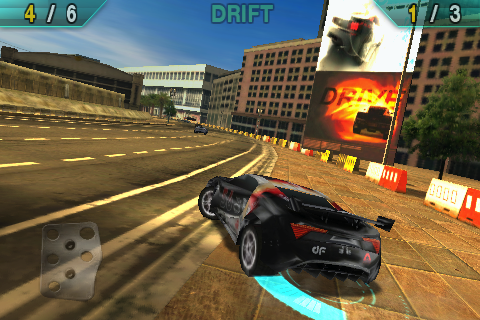 The main gimmick of Split/Second is the powerplay system. Racing through the game, a gauge near the back of your car slowly fills up in three segments. Doing things like drifting, drafting opponents, and just generally racing as aggressive as possible increases your powerplay meter. You can then spend this powerplay energy to initiate various explosions throughout the track to take out enemy racers as well as significantly altering the track itself. This can result in debris and track damage that you must dodge and avoid in subsequent laps. The game offers 3 types of modes throughout: Detonator, Elimination, and Race. Detonator pits you against the track itself in which all possible explosions occur during your run. You just need to finish in the time allotted. Elimination is an aggressive quick-elimination mode where the trailing car is eliminated at regular intervals. Finally, Race is self explanatory. Controls are limited to auto-acceleration, tilt control and manual braking with multiple button layout options.

As some commenters mentioned in the preview post, the powerplay gauge increased very slowly in the preview build. This seems to have been tweaked to be more in line with the console version of the game and it seems rare that I’m ever really starved for powerplays. 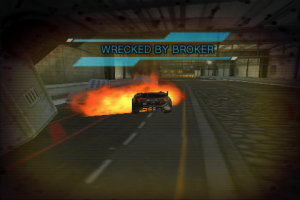 Unfortunately, the other issues mentioned in the preview still remain. While the game itself is a fast arcade racer with a neat gimmick, it almost seems like too much was sacrificed when compressing the game down from the XBOX 360 or PS3 to the iPhone. So many of the visual effects are missing, and even the biggest explosions aren’t nearly as exciting.

In comparison, when playing the full console version of the game, you’re constantly dodging explosions and other environmental obstacles launching themselves in the middle of the raceway. On the iPhone, this explosion mechanic isn’t anywhere near as prevalent as it should be in a game that tries to be based around adrenaline-pumping explosions around every turn.

Split/Second for iPhone does come with online multiplayer, but since it just launched this evening, it’s too early to say whether or not this will become popular enough to sustain itself.

While Split/Second for iPhone can be a fun arcade racer, App Store racing staples like Real Racing [$4.99 / Free] and Need for Speed Shift [$6.99] are just flat out better technical racers. As such, Split/Second isn’t a must have but may appeal to those looking for a different and far more arcade-y racing experience.