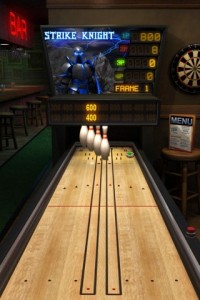 Backflip Studios, the company that brought us such massive hits such as Paper Toss and Ragdoll Blaster, has released their latest game into the App Store. Strike Knight is a casual flicking game based on real life puck bowling arcade games of the 80s and 90s.

We met with Backflip Studios during this year’s GDC where they had an early build of Strike Knight. The game is free ad-supported game that follows the basic structure of bowling but places you in control of a puck. Like their insanely popular Paper Toss game, Strike Knight is controlled using the simple flicking motion to send your puck hurtling towards the pins.

Each game lasts 10 frames. Scoring, however, has a bit of a maddening twist. Your score for either strike or spare is based on the timing of your shot. A score indicator is constantly cycling through the top of the screen and freezes at the moment you flick.

We had a great time with Strike Knight at GDC, and it being a free download makes it easy enough to give it a try. Ads can be removed through a $0.99 in-app purchase.

True to its dive-bar origins, we spent one late night gambling away with the developers in head-to-head sessions. Backflip has had a lot of luck with high quality free ad-supported games, and Strike Knight is a great addition to their lineup. They have an aggressive plan for many more releases in the near future.