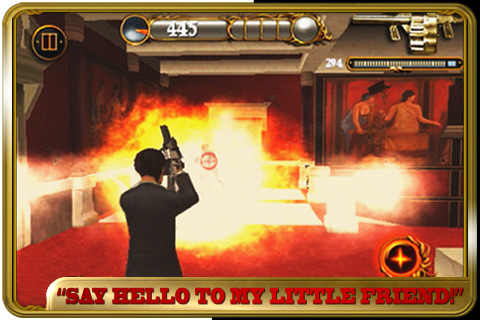 Released last month, Scarface: Last Stand [App Store] is an on-rails third-person shooting game themed after the final scene of the 1983 cult classic movie Scarface. With slightly clunky controls, middling graphics, and fairly repetitive gameplay it was hard to recommend at the initial $6.99 price point unless you were a diehard fan of Scarface. Well for today only, the game is available for free as part of FreeAppADay.com. Despite it’s drawbacks, there’s plenty of content in Last Stand and it has some fun moments, and is definitely worth taking the time to download while free. 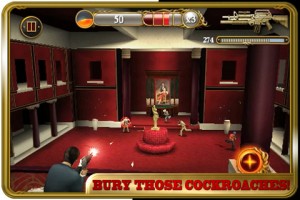 The game takes place during the end of the movie’s plot when main character Tony Montana has an army of assassins sent to his mansion to kill him after double crossing his Bolivian drug lord boss. Not the best situation to be in. You control the aim and firing of Tony as he fends off attacks from every direction. An analog nub in the left corner controls an onscreen cross-hair and a button on the right fires your weapon. Tony automatically moves to different points in the mansion as you aim and fire at oncoming waves of enemies. It works decently, but the aiming is too imprecise to be very effective. An auto-aim option alleviates this, but takes away much of the challenge. The gameplay can be entertaining for a while, but eventually becomes monotonous as you play in the same parts of the mansion with the same enemies over and over. 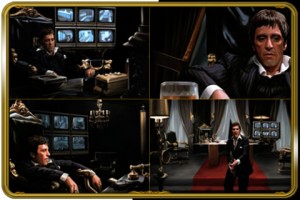 Although the play experience is not stellar, there are a lot of standout features to Last Stand, especially for fans of the movie. While the graphics are none too special, the little details of the mansion interiors and Tony’s extravagant office are fairly accurate to the film. Voice samples are taken directly from the movie and feature many of the popular profanity laden quotes from Tony. There’s a nice arsenal of different weapons to unlock and use that somewhat spice up the gameplay and, as a nice touch, the gun firing sound effects seem to be sampled directly from the film as well.

In addition to the 30 level Arcade mode, there’s a Survival mode, a number of achievements and wallpapers to unlock, online leaderboards, Facebook connectivity, and statistics for every level. In other words, there’s a lot of stuff to do. If you’re a fan of the movie Scarface, or just looking for some simplistic shooting gallery-type action, Scarface: Last Stand is worth a download during today’s free promotion.