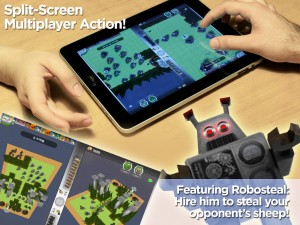 TowerMadness HD is an open-field or fixed-path tower defense game where you can create your own path to defend off the enemies (Aliens) from reaching your base (herd of sheep). The game has full 3D graphics with pinch-to-zoom capabilities to view the game from any angle, all the way down to first-person viewing of the action. You can check out our full review of the iPhone version of TowerMadness here.

One of the most intriguing new features coming to the HD version is the split-screen multiplayer mode. The way it works is that each player is controlling different games, but they are fighting the same linked waves of aliens, allowing each player to have their own strategy. Sending waves in early will result in both you and your opponent having to fend off the incoming aliens. So if your confident in your defenses, you can overload your opponent with waves and win, but this could also result in your own demise if your not careful. There are also new multiplayer specific features, like ‘Panic Your Opponent’, where you can accelerate the aliens on your opponents side for a little while to hopefully get past their defenses. Another one is a new character called ‘Robosteal’, who will travel down your opponents path and steal a sheep if he reaches them, and give it to you.

Look for TowerMadness HD on the App Store soon as it has already been submitted.