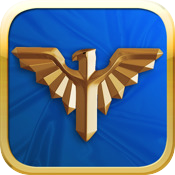 There’s been a host of high profile vertical shooters released on the App Store, from the hardcore Espgaluda II [$8.99 / Free] to the whimsical Doodle Flight [99¢, but one game that’s quietly flown under the radar is Gamelab’s Roswell Fighter [99¢ / Free / $1.99 (HD)]. Released last October, it offered solid shooting action, exceptional graphics, and a charming theme thick with 1950’s UFO paranoia that managed to win over a modest group of fans despite not getting much exposure. With a recent update adding two brand new levels and a native iPad version released last week, now is a great time to give Roswell Fighter a look.

The action in Roswell Fighter is above average, although nothing groundbreaking. Using either touch or tilt controls, you’ll pilot your plane across 11 different levels, doing your best to blast down an onslaught of aliens who are invading Earth. Your main cannon can be upgraded multiple times, and a few special weapons can be collected throughout the game to further enhance your offense. One such weapon uses collected orange stars dropped by defeated enemies to fill a gauge that unleashes a devastating laser. Another brings two wingmen to your aid for a short time, increasing your firepower to nearly the whole width of the screen. And of course, there’s a screen clearing bomb you can collect and use. It’s pretty standard stuff, but enjoyable nonetheless. 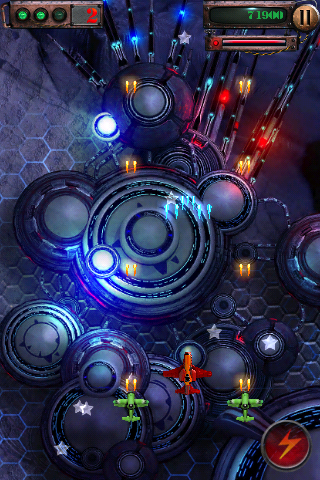 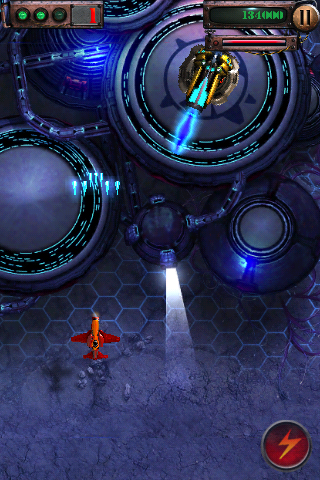 The developer does throw in some elements to break up the more traditional gameplay, with mixed results. At times, a short “quick time event” will pop up and task you with appropriately pressing a series of buttons in order to continue on. It’s a nice idea, but ultimately feels too simplistic to really add much to the gameplay besides a brief break in the shooting. Other times you’ll be avoiding environmental hazards, such as giant saws and gears, or a maze-like path of mines. These sequences actually test your ability to fly precisely, and feel a bit more successful than the QTE portions. At the very least it’s nice to see a developer trying some new ideas while treading such familiar territory.

While the gameplay itself is certainly engaging enough, it’s the look and style that really sets Roswell Fighter apart from other shooters. The backgrounds are beautifully detailed, and look especially crisp on the iPad. The enemies are all rendered in 3D, and despite some slightly jagged edges, have a nice colorful look and good variation in design and attacks. There’s a few boss fights throughout the game that feature huge enemies with multiple hit points that must be destroyed. The bosses tend to be rather easy, but are pretty impressive to look at. 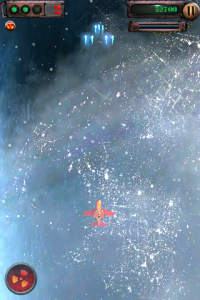 The first 6 levels take place on a war torn Earth, but midway through level 7 your craft comes upon a mysterious hangar in Area 51. After flying through the hangar, and a short QTE, your plane emerges as an alien infused fighter jet. The Earth is then promptly blasted into two by the aliens, and you take your fight into orbit. The rest of the game has you battling through space, adding new enemies and attack patterns, with the final level taking place on the alien’s home planet.

It’s these changes in scenery and gameplay that make Roswell Fighter fun to play. The space portions have a high level of action, and the final level in particular is both challenging and graphically breathtaking. The first portion of the game on Earth is fun as well, but maybe lasts a bit longer than it should. If anything, these last levels serve as a reward for those who play through the whole game, and I would love to see some more levels based on the alien’s home planet in future updates or a sequel.

When played on the iPad, Roswell Fighter really shines. The game is fun on the iPhone, but like any game that is controlled with your finger, a sizable portion of the screen can be obstructed at times. This issue is completely eliminated on the large screen of the iPad, as even with your finger all over the screen, it never seems like you’re covering much of the action. The HD version only has a $1 premium over the iPhone version, and is recommended if you own an iPad.

Overall, Roswell Fighter does everything extremely well and is one of the better shooters available. It really is a beautiful game, and we were surprised at how fun the game was to play on the iPad. If you stick through the slightly sluggish first half of the game you’ll be treated to a highly satisfying second half. My strongest point of contention is with the game’s music, which sounds era-appropriate but doesn’t fit in well with the onscreen action at all. Luckily, this can be disabled in the options. Besides that there’s really not much to dislike about Roswell Fighter, and at 99¢ and $1.99 for the iPhone and iPad versions respectively (as well as a lite version), it’s a real bargain for such quality content.