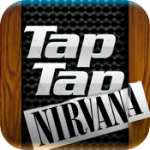 Marking a significant improvement over the recent Justin Bieber Revenge [$4.99] comes tonight’s release from Tapulous, Nirvana Revenge [$4.99]. Following the same formula as the rest of the Revenge games, Nirvana Revenge comes with thirteen Nirvana song from several different albums (and live performances) to tap along with for less than you could buy the same songs from iTunes for.

The track list should make any 90’s alternative fan happy:

If this is the first you’ve heard of Tapulous’s rhythm games, they’re the finger tapping equivalent of Dance Dance Revolution. There are free versions you can try to see how the game works before diving in to any of the paid licensed games. For the iPhone you can either download Tap Tap Revenge 3 Boost [Free] or if you have an iPad, grab Tap Tap Radiation [Free]