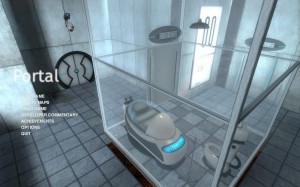 “You’re doing very well," a machine voice blurts through a state-of-the-art monitoring system. “Please be advised that a noticeable taste of blood is not part of any test protocol, but is an unintended side effect of the Aperture Science Material Emancipation Grille, which may, in semi-rare cases," it adds, “emancipate dental fillings, crowns, tooth enamel, and teeth."

Rarely does a game hit with the impact of Valve Corporation’s Portal. An instant success among critics and fans alike, the downloadable puzzle game carved itself into the enthusiast hive mind. Part of the reason is due to the quirky, yet sinister GLaDOS, a machine overseer of the game’s unique sterile observatories. Its one-liners (see above), fictitious warnings, and promises extract chuckles within a  serious tonal framework that challenges without bringing users to their knees.

Of course the bigger reason for its success is tied to the game’s name. Portal is a first-person game built with the Half-Life — called “Source" — engine. But unlike its Source counterparts, Portal shirks conventional teeth-gnashing, bullet-spewing visceral action. Solving and casual exploration composes its core, with the characteristic portal gun being the chief object of accomplishing both these concepts. When fired twice, the portal gun opens up teleports that users can then use to navigate and interact within their white-walled, three-dimensional world.

Portals are key to discovering new routes within each of the game’s many confined puzzles (the protagonist is trapped in a series of “tests") that need to be solved before another can be tackled. Reduced to the essentials, most puzzles break down into a traditional “keep the button pressed and a door will open" mold but there are other spots of puzzle design at work. Momentum, platforming, and even threat avoidance all have a place.

// There’s nothing like Portal yet on an iDevice (even though some brave legal ice-skaters may still be porting the title with Unity – see video above). I’ve yet to discover a narrative with the same wrinkles or even design with the same complexity and care. But there’s no reason to keep yourself from exploring what Portal has to offer; Until May 24th, 2010, developer Valve is offering a download of the game for free.

A Macintosh version is now available for free as well. Valve just opened up their Steam platform, which is something like iTunes for videogames, to the Cupertino crowd. The celebration, I suppose, is in full swing — over 60 titles are to be available soon for Mac users, with more are set to come each Wednesday… but none are free like Portal. 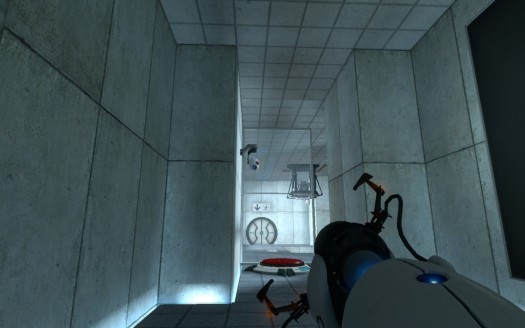 I realize Portal isn’t an iDevice title — although that idea tickles me — but it’s silly to ignore how unique and compelling Portal is. If for whatever reason you don’t have the hardware to run the game right now, go ahead and give it a download anyway. It’ll stay tied to your Steam account forever, just like an iTunes App Store download. Oh, and do enjoy the cake on your way out.