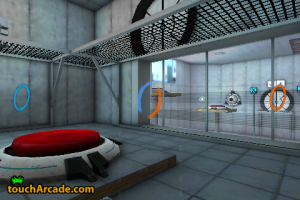 A few minutes ago we received a provisioned copy of the Portal clone built in Unity that we posted about last week. There have been suspicions since the original video was posted that the entire thing was an elaborate hoax, but we can now confirm that it actually does exist.

The game in its current state is rather buggy, I’ve fallen through the world a few times and the way gravity is handled when going through portals needs some tweaking. Also, according to the developer, the controls are not as good as they’d like them to be, a sentiment I can get behind as playing the game right now feels rather clumsy.

Here is a short video of me playing through the first room and entering the second room of the first level:

All in all though, we’re looking at a very promising Portal clone that still needs a good bit of work before it’s ready for prime time. Also, it remains to be seen what Valve’s reaction to this project will be as ultimately they hold the keys to the castle and needless to say, this Portal clone is treading on some extremely thin legal ice.