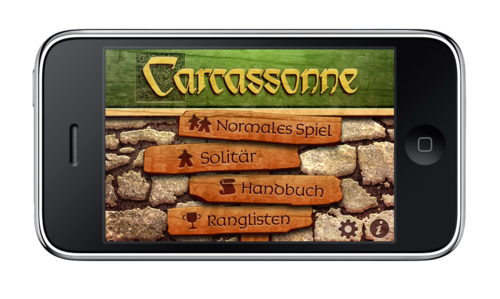 One board game that our readers have continually mentioned as a worthy candidate for the AppStore is the hit German tile-based game, Carcassonne. This is undoubtedly due to Sierra’s well-received adaptation of the game for the XBOX Live and several indie spin-offs that we’ve already seen on the AppStore. In any case, we’re pleased to announce that developers The Coding Monkeys together with Hans im Glück, one of the publishers of the original boardgame, have heard your cries, as Carcassonne is almost done and ready to hit the App Store sometime in May.

The Carcassonne website provides a very brief description of the features included in the initial release. From what we can muster, Carcassonne will include all the tiles from the original board game tileset, with the expansion tilesets (of which there were several) coming later as In-App purchases. It also offers the full suite of multiplayer options, including pass-and-play, local (WiFi and Bluetooth) multiplayer and online multiplayer, which is terrific to see as this sort of title would be stunted without the ability to find willing opponents at any given time. Of course, there is also the option to play against the computer, with a range of AI difficulties available to test yourself against.

Screenshots of the game so far are promising, and the game really looks like it’s getting a thick layer of polish. So far, the developers have announced an English and German translation for the iPhone/iPod devices only, but have promised that the app itself will be universal, incorporating iPad support at a later date. We’re looking forward to getting a hands on preview with the game in the near future where we’ll be able to provide further information before its release later this month at the introductory price of $4.99.