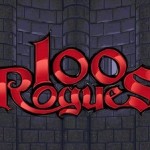 Every now and then a game is released that completely transcends the genre it’s made for, elevating its possibilities to all new heights. It doesn’t happen often, but when it does it results in something genuinely spectacular. And that is precisely the case with Dinofarm Games and Fusion Reactions‘s lovingly created 100 Rogues [App Store].

100 Rogues is an arcade-style dungeon crawler/rogue-like loosely based on classics such as our highly rated Sword of Fargoal. We say loosely based, because while it features the typical dungeon crawler elements of near-certain death, randomly generated maps and loot and a foray into the depths of an enemy-riddled pit, 100 Rogues delivers it in a way that makes you feel you are playing something else entirely. 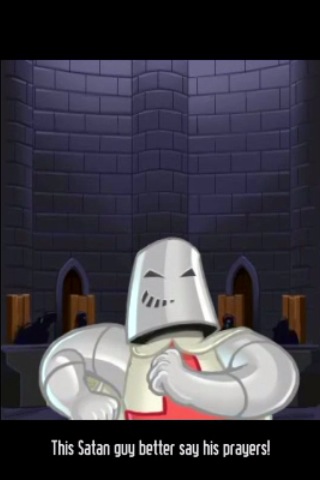 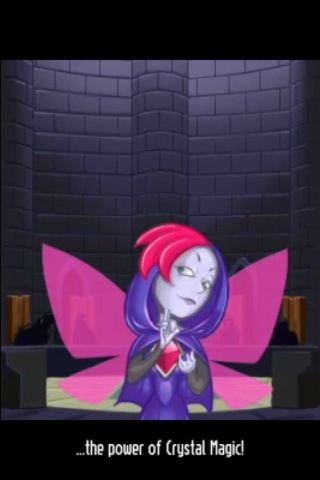 Obviously, at first glance, this can be credited to its utterly gorgeous presentation and visuals. Typical dungeon-crawlers are recognisable by their dogmatic approach to gameplay over graphics, many of which are still ASCII-driven. That is definitely not the case here. To begin, 100 Rogues introduces its heroes — the Crusader and the Fairy Wizard– through two different, tongue-in-cheek cutscenes that reveal a surprising amount of context for each character and a dubious quest to eradicate Satan himself. It sets the mood for a game riddled with comical self-awareness.

This certainly plays second-fiddle though to some of the most incredibly animated 2D caricatures we have seen– period. Both the Crusader and the Fairy Wizard are brought to life by Dinofarm Games and Fusion Reactions, each with their own distinct personality and style. The Crusader is an armor-clad, righteous bastion of good who cuts a swathe through enemy hordes with his cape flicking behind him; standing in stark contrast to the Fairy Wizard, a withdrawn, misunderstood creature of magic that prefers to attack with guile and deception from afar. 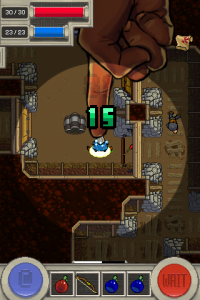 It’s not all eye-candy though, as 100 Rogues brings to the table 8 unique skills for each character. The Crusader for instance, can call on divine powers, knocking back enemies with his Whack of Glory, or Healing himself if things get rough. Also, in what is quite possibly the coolest and most hilarious ability that I have ever seen, he can call on God Himself, who appears in the form of a giant finger that descends upon the battlefield to smite a foe or heal our Hero in times of need. The Fairy Wizard on the other hand, is far more fragile, but is able to teleport to elude enemies and cast crystal attacks from afar. The Fairy Wizard is also capable of confusing enemies or calling on a giant crystal ball familiar to attack nearby enemies.

Though the skills themselves look great and varied, it is their thoughtful implementation that really makes combat in 100 Rogues something special. This is because many of the skills have a strategic use that once discovered, can really excel your combat ability. For instance, the Fairy Wizard can combine a dagger attack with Teleport (aptly named Telestab), popping up behind an enemy to deliver a lethal backstab, only to teleport away again. The Crusader on the other hand can Overheal, giving himself bonus life above and beyond his normal hit points. And though his Whack of Glory knocks back enemies, if they are against an obstacle already, it delivers a devastating critical attack instead.

These secondary functions are critical to advancing through the gruelling 10 dungeon levels included at release. But they aren’t made obvious from playing the standard game, so to lend a hand the developers have included a Challenge Mode to highlight to players some of their uses. There are 10 challenges available at release which have you killing a number of enemies or escaping the level within a set number of moves, usually giving you only few hit points and one crucial ability to complete your task. They’re a great way for players to familiarise themselves with the advanced strategies, though we’re positive there are more to be found through experimentation.

It’s an indication of the breadth of features to cover here that we’re only now arriving at how well 100 Rogues handles. Foregoing any on-screen controls, your characters are navigated by tapping in any four directions around them. Similarly, enemies are targeted by simply tapping on them (if a range attack) or running into them by the aforementioned mechanism. Skills are activated by tapping on your character, which in turn reveals a skill palette from which your skill is chosen, and then a suitable target selected. There are two on-screen buttons on the lower left and right of the screen to open your inventory or issue a wait command respectively, and a 4-slot quick-bar for immediate access of items. It’s worth noting that the game can only be played in Portrait mode, too. 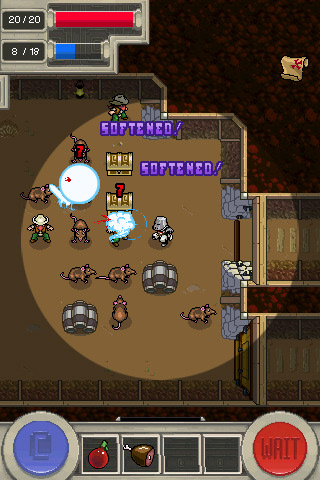 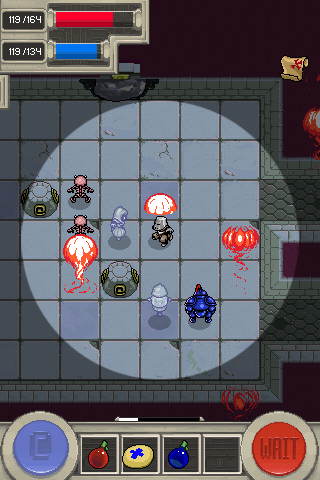 Items and equipment play a big part in dungeon crawlers, and that’s no different here. Players can equip a large assortment of weapons, from swords and axes to wands and bows (to name a few), together with a range of armor types and accessories. 100 Rogues runs the full gamut of item effects and stat bonus’ too. What’s more, some enemies can only be effective by certain item types– something that will have to be learned quickly by players in order to proceed through the depths. As well as weapons and armor, there are also spell scrolls and buff scrolls that enhance either your health, magic or strength, or can raise the item level of equipment. 100 Rogues also has a countdown of sorts in the form of hunger, forcing you to keep your belly full lest your hunger cause you to waste away– placing a significance on searching for safe meals to consume on your quest.

If hunger doesn’t get you, enemies surely will however, as 100 Rogues is true to its origins in that it is challenging and unforgiving, with a vast array of enemies that all require a different approach to defeat. If you make one wrong move, you are dead. If you are unlucky, you are dead. If you don’t manage to find food, you are dead. And if none of these kill you, then maybe the large-scale boss encounters found every 5 levels will. These are all grim realities of the dungeon crawler. Fortunately, by way of its versatile skill system and arcade-paced strategic action, 100 Rogues is still a highly accessible adventure. And in case you forget, the game regularly lets you know that death is a certainty, and that fun is to be had in achieving that high score and glorifying your name in the online leaderboards forever.

100 Rogues is as much about exploration as it is about move-by-move action and employing a careful strategy. Game sessions are generally short, but 100 Rogues still saves your game by the move, meaning interruptions are a thing of the past and lengthy game sessions are easily broken down into short bursts. Finally, 100 Rogues is rounded out by a catchy, retro-style, synthesised soundtrack that is of the same calibre as the rest of the game.

100 Rogues is an evident labor of love for the developers, who already have a long list of planned features including at least two additional classes (the Dinoman Bruiser and the Skellyman Scoundrel), 10 brand new levels, an item shop, many more monsters and items, in-dungeon NPCs and an Endless game mode. All considered, 100 Rogues is an effortless recommendation to anyone remotely interested in the genre, being one of the most captivating, refined and rewarding games on the App Store. Heck, we’re not even sure we’ll ever find Satan’s lair, but it certainly won’t be for want of trying as 100 Rogues is simply brilliant.

UPDATE 1: A number of forum members in the 100 Rogues thread are experiencing random crashes. We haven’t had issues in our play throughs of the game, but the developers are looking in to the cause currently. It may be worth waiting to see what they find out before picking this up if you’re concerned.

UPDATE 2: Developer Wes Paugh posted in the comments that the crashes are related to equipping some shields. An update is being submitted immediately to address stability issues.