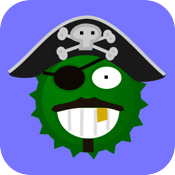 At first glance you might dismiss Domino’s Adventure [App Store] as being just another generic Rolando knock-off, and that’s understandable as they do share similarities in look and gameplay. But beneath the surface lies a brilliantly designed platform experience that admittedly draws influence from many different areas, but melds them together in a way that’s uniquely its own. A fun physics system, simple controls and a demanding test of your dexterity combine to make Domino’s Adventure a pleasure to play. It’s a pretty short ride, but at only 99¢ it’s one worth taking.

The protagonist, Domino, is a circular alien that has crash landed on Earth and must traverse 20 increasingly difficult levels to get back to his lost spaceship. Left and right arrows in the lower corner of the screen roll the character in either direction, while simple jump and spike buttons sit in the opposite corner. Which corners these controls are located in can be configured in the options. There’s tilt controls available if you choose, but I far preferred the virtual touch controls. Domino jumps higher the longer you press down, and the spike button gives him a pointy circumference for clinging to walls and ceilings. 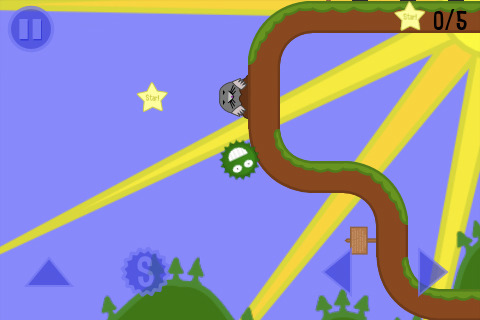 It’s certainly taking a page out of Rolando’s book, especially in regards to the Royal Spikey Commando character, but never comes across as a malicious rip-off. If anything, it’s merely because these particular gameplay mechanics are so solid and entertaining. Any feelings of déjà vu are quickly forgotten anyway once you start making your way through some of the interesting level designs.

The physics in the game have a floaty and fun feel, and make for some pretty crazy experiences. For example, you may encounter a series of planks standing on end, set up like dominoes. You’ll need to jump into them, knocking them down onto each other creating a bridge for you to cross. Even better are the many instances that have you knocking one of those planks over onto a line of rotating gears which propel the plank forward while you ride it like a surfboard, reminiscent of something from a Super Mario Bros. game. Each level is progressively more difficult and cleverly designed, and I found myself being surprised with each new one.

It’s very casual-friendly, with unlimited lives and checkpoints spread throughout the game. At the end of each level it tells you how many lives you used, the time it took to beat, and how many of the 5 gold stars you collected. Sadly, it doesn’t do anything with these stats, and the game is just begging for some sort of online leaderboard or achievement implementation. There is incentive to collect the stars as you can unlock three more skins for Domino at set star intervals, but unfortunately nothing extra happens when you collect all 100. I’d really like to see something special if you can beat every level with just one life, which would be quite a task for anyone to complete.

You can expect to get a few hours or so of playtime completing all the levels and collecting every star, which isn’t bad but leaves you wanting more. There’s just something enjoyable about playing that I’m really hoping for some more levels sometime in the future.