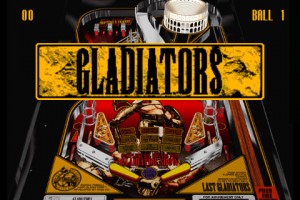 Last Gladiators Ver.2010 is a port of a 1995 pinball game for the Sega Saturn. In a world where there’s so many different options to satisfy your pinball needs available on the App Store, some aspects about this release will stick out like sore thumbs. The price, the dated graphics, a lack of features, no online scores… the price. It can be kind of a hard sell on the surface. But make no mistake about it, this is hands down the best pinball gameplay available for your device. If I’m going to be trapped on a desert island with my iPhone and can only have one pinball app, I want it to be Last Gladiators.

Let’s get right to the elephant in the room, the cost. The app itself is $4.99, and comes with the Gladiators table. The other three tables that make up the original Saturn game are sold separately as DLC for $4.99 apiece. Yep, $4.99 for each additional table. I know that most of us who were fortunate enough to have grown up during the arcade era have probably spent well more than five bucks playing a good table for a couple of hours. So asking that much for a table you can play infinitely that fits in your pocket doesn’t sound unreasonable. In the App Store economy, however, it’s equivalent to an arm and a leg. The pricing alone means this game won’t be for everybody. 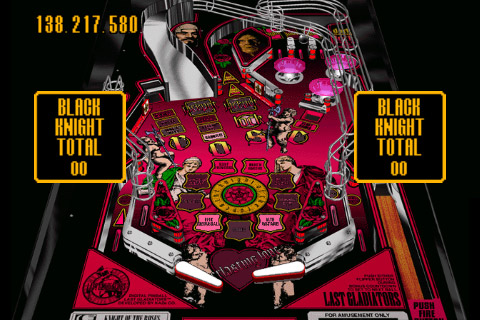 Pricing aside, Last Gladiators does everything right in the gameplay department. It’s amazing that with all the different pinball games that have been released on iPhone, none of them have ever quite felt like playing a real life table. This one’s different, this one feels right. The physics of the ball and the design of the tables are nearly perfect. I’m not going to go into specific table detail (a video of each one can be seen in the thread in our forums) but all four feature multiball and more rounds and missions than I can even count. The instructions run 30+ pages for each table so you can familiarize yourself with every scoring nook and cranny, and also get an idea of just how much depth is on offer here.

This isn’t the most visually impressive pinball game, after all it is 15 years old, but it still manages to have a great look that functions well. The table designs are more akin to the pinball tables of the late 80’s and early 90’s, rather than the highly complex mechanical behemoths of the later 90’s. A neat effect is a scaling ball, so it looks smaller while in the back of the table and quite a bit larger as it’s near the flippers. Handy on-screen indicators point you towards active goals, and it’s always clear what you’re supposed to be doing even for a beginner. There aren’t really any iPhone specific features, and as far as ports are concerned this is pretty bare-bones. This is basically the Saturn game reworked with touch screen controls, and that’s about it.

If you’re a pinball fanatic, and just want the best experience regardless of price, then you owe it to yourself to drop $5 on the initial Gladiators table. It will keep you busy for a long time, and you can always decide to splurge on the extra tables sometime down the line when you’re ready for something new.

There’s no official lite version available, but you can try Ultra Legend Pinball which is basically the Gladiators table with slightly reworked functionality and Ultraman artwork. I hesitate a bit recommending this, as it’s entirely in Japanese and the Ultraman version of the table isn’t nearly as good as the original, but at the very least it gives you and idea of what the Last Gladiators tables are like. Whatever your feelings on the pricing of Last Gladiators, it’s a stellar game that shouldn’t be missed if you’re looking for an accurate simulation of pinball.