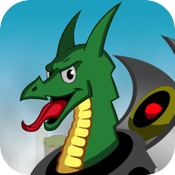 The Muteki Corporation, creators of Topple 2 [99¢ / Free] and The Battle of Pirate Bay [99¢ / Free] had a new game hit the App Store recently, Super Jetpack Dragon IV: Village Burntopia [iPhone: Free / iPad: $1.99]. Similar to Adult Swim’s free online flash game, Robot Unicorn Attack, Super Jetpack Dragon IV: Village Burntopia is a high-scoring endurance games where players play as a dragon running across the countryside capable of jumping, briefly gliding, and smashing through walls depending on which side of the screen you touch.

Scoring high involves picking up meat, burning every town you come across, and most importantly, not dying. As you get farther and farther your dragon runs even faster, creating a slow but steady difficulty curve. There are also a bundle of Plus+ achievements to unlock, and the entire game is set to some awesome rock music. 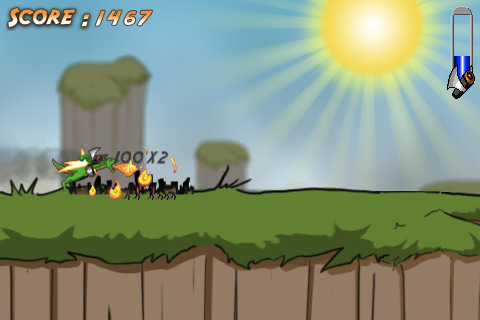 The iPhone version is completely free, with a brief interstitial ad (currently for Bing.com) between loading the game and playing. If you want the HD iPad version, be prepared to fork out two bucks for basically the same game with higher resolution graphics.

Sure, Super Jetpack Dragon IV: Village Burntopia is a little on the simple side, but I have a hard time complaining about a fun free game that helps me pad my Plus+ gamer score.