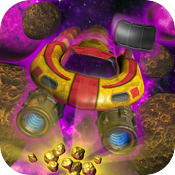 Venan Entertainment’s Space Miner [$4.99 / Free] seems to be universally loved by nearly everyone who touches it. We couldn’t get enough of the game in our review, and it is one of the few iPhone games video games I’ve ever played where I enjoyed playing through it so much the first time that immediately after I beat the game the first time I started a second play through on the next higher difficulty.

In short, it’s Asteroids meets the RPG. But that description really doesn’t do the game justice.

Space Miner places you in the role of the nephew of good ole’ Uncle Jebediah Gritstone, proprietor of the galactic Gritstone Mining Station. Uncle Jeb has hired you on to help with the ore mining and it’s with much excitement that you make your way to his mining station in your veritable space jalopy. Once on board, things get complicated (it’s a long story, enjoy it in-game) and Uncle Jeb is desperately counting on you to go out into the neighboring sectors, blast asteroids, and bring back the precious ore contained within. The more ore you collect, the bigger your cut of the profits. But the pitiful ship you start off with is hardly up to the task. 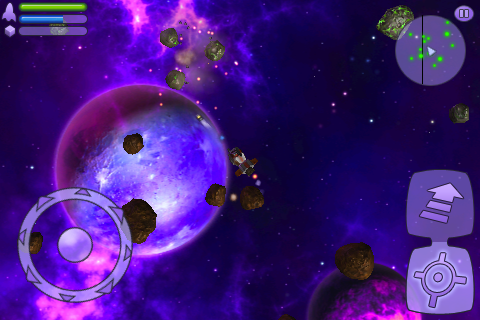 As you accumulate profits, the money can be spent in Uncle Jeb’s shop, where more powerful ships, weapons, shields, ore collectors, power plants, and the like can be purchased. It doesn’t take long to find yourself sitting in a decent ship with multiple ore blasters, a sizable cargo bay, and an ore collector that can get the job done. And the whole package is done up with a great deal of spot-on humorous dialog and even an amusing banjo-based audio track that fits ole’ Uncle Jeb’s operation to a T. (There’s no doubt that he’s got a still hidden somewhere on that rock of his.) …Read More

This update makes this amazing game even better. If you’ve got an iPhone 3GS or 3rd generation iPod touch, you will be able to enjoy new shader effects on the asteroids that really make the game look a lot cooler. If you don’t have a new device, you’ll still be able to enjoy the rest of the new features which include a new level 7 pilot’s license which unlocks even more spaceship upgrades. Also, five new pieces of alien technology are floating about somewhere in space for you to find.

My favorite addition is the new even harder UltracORE perma-death difficulty mode. Perma-death always adds an amazing sense of danger to a game, and seeing how far I can get in Space Miner on UltracORE has pretty much owned my evening so far.

The difficulty curve of the game has been slightly tweaked, and to go with all of these new features comes another set of Plus+ achievements for players to unlock as well as Facebook and Twitter integration to make sure your friends know exactly how good you are at the game.

If you haven’t picked up Space Miner yet, this is an excellent opportunity to do so. It’s on my short list of games I tell people to check out after buying an iPhone, and if nothing else, you really should give the lite version a spin. Space Miner is a fantastic game made even better by this update.