Two free, lite versions of paid iPhone games recently appeared in the App Store and we wanted to make sure that readers who may not have tried these titles had them on their radar. 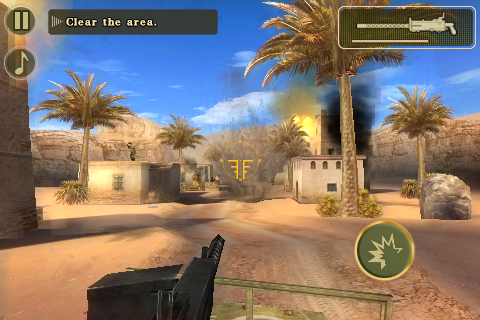 Back in February we took a look at Gameloft’s Brothers in Arms 2 [link], a follow-up to the late-2008 release Brothers in Arms Hour of Heroes [link] which was one of the most impressive games in the App Store at the time of its release. We found much to like about the sequel. 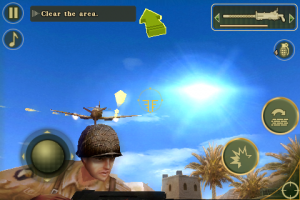 Brothers in Arms 2 was designed as an iPhone game from the ground up. Weighing in at over three times the filesize of its predecessor, it brings to the iPhone a much larger game experience. This time around it’s a first person affair, as opposed to the third-person, over-the-shoulder experience that is the first title. Actually, when in duck-and-cover mode, BIA2 does jump out to third person — and that’s something you’ll see often, as using crates, walls, and tanks for cover is pretty much par for the course in this title. That is, when you’re not sprinting across the battlefield, manning the turret in a jeep or tank, or piloting a “glider" through heavy flack. Yea, it’s a pretty intense affair.

Gameloft’s recently posted Brothers in Arms 2: Global Front FREE [App Store] is a scaled down version that offers a taste of the full release through a battle mission set in the Pacific. 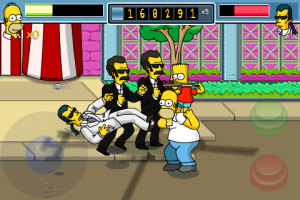 Late last year everybody’s favorite cartoon family came to the iPhone in the form of The Simpsons Arcade [App Store], a touch-controlled beat-’em-up of a different sort. In the game you play as Homer, who is on a quest to chase down a mysterious doughnut which also happens to be host to a USB flash drive that holds some kind of secret information that nearly the entire population of Springfield seems to be in on. Using an on-screen joystick and two buttons Homer can perform a variety of simple moves and combos on the seemingly never-ending supply of henchmen that are dead-set on keeping you away from the doughnut in question.

While it’s certainly not the most ambitious fighter we’ve ever seen, well — hey — who doesn’t want to fight as Homer?

EA’s The Simpson Arcade FREE [App Store] delivers the first level of the paid release to get gamers hungry for more Springfield smackdown.