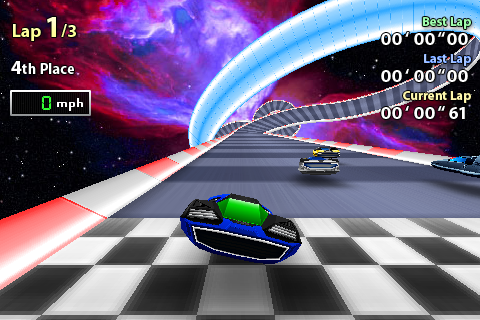 Orion Racer [App Store] from Techlogica is a futuristic racing game that draws influences from the classic F-Zero and Wipeout franchises. It features crisp visuals, a silky smooth framerate, and a tremendous sense of speed.  While it lacks the robustness of some games, it makes up for it with it’s focus on a pure racing experience. 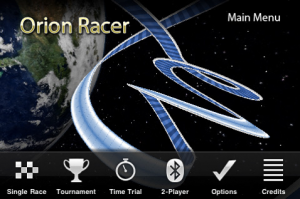 The inspiration in this game is obvious from the initial boot up. The hovering vehicles, the sound of the thrusters, the overhead camera that slowly pans down behind the racers before the start. The soul of F-Zero is definitely present here — and it’s a good thing. Each of the four vehicles available in the game have a distinctive feel from one another, and you get a different experience using each one. The tracks are nicely designed, featuring twists and turns reminiscent of Wipeout, that only get more maniacal the deeper you advance in the game. There are no weapons, jumps, hazards, or damage of any kind. Hitting the rails merely slows you down, and you cannot fly off the edge. It’s an experience that’s stripped down to the core — just you versus the track with the competition breathing down your neck — but it manages to be a whole lot of fun in it’s simplicity. 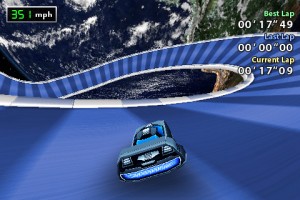 The main campaign in Orion Racer is a tournament that has you racing through the 10 available tracks in succession. Placing 1st in the tournament unlocks the fourth vehicle, and placing 3rd or better unlocks the final track for play in the additional single race, time trial and two-player Bluetooth modes. (The first nine tracks and three cars are unlocked from the start.)  The time trials have online leaderboards and the ability to watch replays of the top 25 fastest laps for each track, lending a decent amount of replay value to the game. There are also sliders in the options screen to adjust AI difficulty, brake assist, and tilt sensitivity. You can really tailor the game to your liking, although steering is a tilt-only affair (no option for touch).

While it doesn’t sound like a whole lot on paper, Orion Racer really stands out in terms of actual gamplay. The sense of speed is exhilarating, most likely due to the omission of any real graphical bells and whistles. It’s still quite visually appealing though, and moves at an incredible clip. Tacks are intelligently designed and are a thrill to play through, delivering a feeling somewhat akin to riding a rollercoaster. It reminds us of why we played games like F-Zero in the first place — it looked great, played fast, and controlled just about perfectly. Orion Racer succeeds in all of these areas, and while some additions could certainly add to the game, what’s here is a fun package that’s worth taking a look at for fans of racing games.