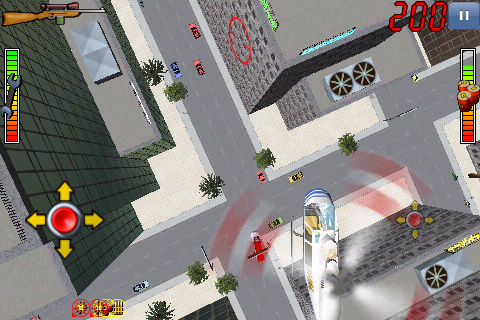 Seemingly coming out of nowhere, Vertigo Rogue [App Store] is a helicopter combat game with a huge 3D city and missions that are reminiscent of the Grand Theft Auto games. While not as highly detailed or in-depth as GTA, the lively city, impressive graphics, and brilliant controls makes for a highly entertaining game that stands out as being extremely impressive coming from an indie developer. 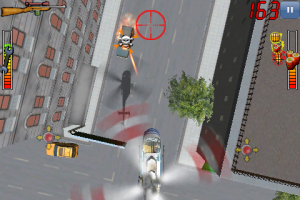 The story goes like this. As the protagonist, you are a mercenary helicopter pilot that has landed himself in jail. You’ve saved up enough money to give up this sordid life, and settle down quietly with your five year old daughter as soon as you’re released. Unfortunately, your cellmate knows your background, and has a different plan for you. He has kidnapped your daughter and, in order to get her back safely, you’ll have to be a pilot for his mafia family, your first mission being to help him break out of prison and get to safety.

The story is told via text cutscenes before missions, and pressing on the screen fast forwards them. It’s a slightly cliché plot, but it can also largely be ignored if you choose. Vertigo Rogue has 37 different missions to complete, each one advancing the plot a bit more. The missions themselves are very GTA-like, although most boil down to finding and destroying certain people or vehicles (including tanks and fighter aircraft) from your eye-in-the-sky vantage. A handy waypoint system points you in the direction of helpful powerups like health, fuel and weapons, or towards the target(s) you must take out. While the missions get a little repetitious, it doesn’t really matter as they merely serve as a means for flying around a city and blowing stuff up, which is a great time and truly satisfying. 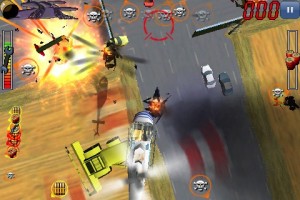 As mentioned, the control scheme for maneuvering your helicopter is excellent. It’s a dual analog setup and functions very similar to controlling a tank. Both sticks forward moves you forward, moving just one stick rotates you, and moving both either left or right at the same time allows you to strafe. Pulling the sticks apart from each other raises you into the air, while pushing them together lowers you towards the ground. A tap on the left stick switches weapons, a tap on the right fires. It’s fairly simple and just makes sense. After a slight learning curve you will find you have incredible control over your copter.

All this would be pointless however if there wasn’t somewhere interesting to fly to. Thankfully, this isn’t a problem as Vertigo Rogue features a fairly lively and expansive 3D city to explore. Everything is rendered beautifully below as you fly high above, and at any time you can smoothly descend for a closer look. There’s always a decent amount of cars and pedestrians going about their everyday business on the ground below, and trees sway from the downforce of your propeller as you get close to them. The detail isn’t staggering, but the city definitely feels alive and looks gorgeous. What’s most incredible is that everything is rendered so smoothly while the game runs at such a solid framerate. There’s even a stereoscopic 3D mode, which causes the game to run much slower on older hardware, but works as advertised and is fun to check out if you have a pair of red/cyan glasses laying around.

I can’t think of the last time I’ve had this much fun playing a game I’ve never heard of. What’s even more impressive is that, according to the credits, the entire game was developed by just one person. If helicopter combat in a large open world sounds like something that interests you, give BrainPhant’s Vertigo Rogue a look.