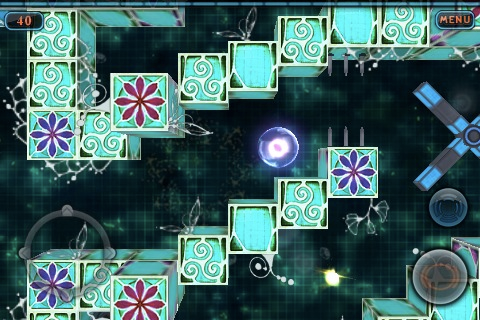 Can a game be a piece of art? So asks Geardome, who strives to deliver just that in their recently released physics-based, ball-roller style game Ozone [App Store].

Dive into the galaxy of Ozone and unveil the secrets of this unique audio-visual experience, a mix of art and technology, never before seen or heard on a mobile device.

The game puts you in control of an inflatable ball that can be moved about various maze-like levels by way of touch-directed bursts of air. The goal is to collect all of the yellow orbs strewn about each of the game’s more than 50 pseudo-3D levels in order to exit each maze. But there’s more in each level than just yellow orbs. You must negotiate a wide variety of obstacles and enemies in order to make your way through each level. There are, among other things, moving traps, doors to unlock, weapons to collect and use, spikes to avoid, and end-bosses to contend with. A steel ball power-up renders your ball impervious to damage and able to plow through certain walls for a short period. Some pathways require you to deflate your ball in order to fit through, and then it’s fingers-crossed that an air pump is just around the corner, because when you’re out of air, you’re out of luck. And those bursts of air that move you hither and yon — they’re not freebies; each burst lowers your air level just a bit. 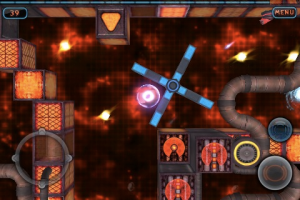 It’s a lot to juggle.

But luckily, time is something you have plenty of in this game. Ozone is not a race against the clock, but is a slow-paced, intricate affair that requires a high level of precision to master. In that way, it’s really not akin to Dark Nebula, a comparison some in our forums have made, in seeing posted screenshots. It reminds me more of Bubble Ghost, actually. It’s a game for the patient, and an experience that is both frustrating (in a good way) and relaxing at the same time. A very well-matched, ambient soundtrack sets the mood and helps deliver what feels like a rather “zen" experience.

The developers have also created a custom level editor that can be used to create your own levels, available for Mac OS X, Linux, and Windows. The game’s upcoming first update will enable the ability to play custom levels, and downloadable content is also on the way. Ozone HD, a version that takes advantage of the iPad’s features, will soon be released, the developer indicates.

The reaction to the game in our forums has been extremely positive. Your Personal Robot shared his thoughts.

…I am playing this gem and WOW am I impressed.
This really is a little indie masterpiece. The graphics, the sound…simply amazing…

This game just feels very deep, very thought out, every detail just seems right in place. Hard to describe it. It’s a complete console game with a fantastic look and feel. And it’s definitely NOT too expensive. This is a title with so much quality, many – or most – of the App Store games are far from reaching.

Ozone is a very well done and highly enjoyable game that should have great appeal to those who enjoy problem solving and being rewarded for precision. It’s certainly one of the more engrossing titles I’ve spent time with in recent months.