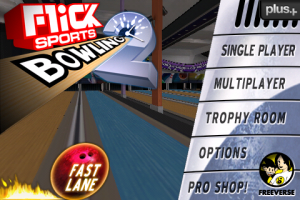 Flick Bowling 2 is controlled using simple touch gestures, and once you get the hang of it, flicking your finger across the screen to bowl works really well. Unlike the original where you applied spin to the ball by swiping across the screen, your entire shot is done in one flicking gesture. To throw the ball straight you flick straight up, to curve it in a particular direction, you simply curve your finger flick. It works surprisingly well. 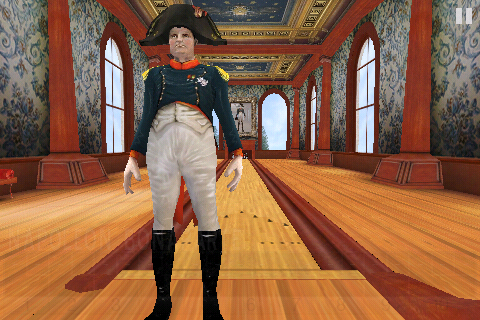 Another new feature in the sequel is the addition of a story mode. Playing as either Jen or Jim, you’ll warp through time (somewhat like Bill & Ted’s Excellent Adventure) to face off in bowling matches against famous figures in history who also have similarly themed bowling alleys while you make your way to the ultimate bowling showdown with the evil Baron Von Schtopwatch. The game itself even admits the plot makes no sense. Aside from story mode, you can also play regular bowling games as well as a quick three frame game.

Here is a video of me doing poorly against Cleopatra:

One of the most interesting things about Flick Bowling 2 is how Freeverse is pricing it. While the original Flick Bowling launched at $4.99, the sequel will come in two flavors: A completely free ad-supported version, and a paid ads-free version. The only differences between the two games is advertising, and the paid version also comes with multiplayer. Both games will also come with DLC packs for customizing your bowling balls, as well as an additional Helen of Troy level.

Freeverse is shooting for launching Flick Bowling 2 on the 23rd, and I really recommend keeping an eye out for it, especially if in-game ads don’t bother you. The bowling control mechanic is fun, the new physics engine is a massive improvement over the original, and the time traveling premise of the game, which is beyond ridiculous, is hard to not enjoy.