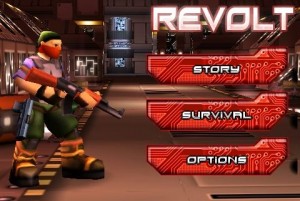 Revolt is a 3D dual stick shooter created entirely by three people: Kristopher Peterson who handles all the art, design, and sound effects, Jaap Kreijkamp doing the programming, and Sean Neville writing the music. This three man team has managed to come up with what very well may be one of the coolest looking dual stick shooters I’ve played recently.

We went over the basic premise of the game in our original preview:

Revolt is an exquisite looking shooter that departs from the usual dual-stick model of unlimited ammo run-and-gunning by throwing a surprising amount of strategy into the mix. The gameplay promotes taking cover and rolling to avoid enemy fire, and ammo needs to be carefully managed across 15 weapons and 5 weapon types. A mixture of lasers, grenades and missile launchers serve to create some of the most impressive explosions and combat effects we’ve seen on the AppStore, too. To boot, Revolt seems to take its storytelling seriously, the gameplay spanning over 8 campaign levels and an impressive 20 survival arenas. 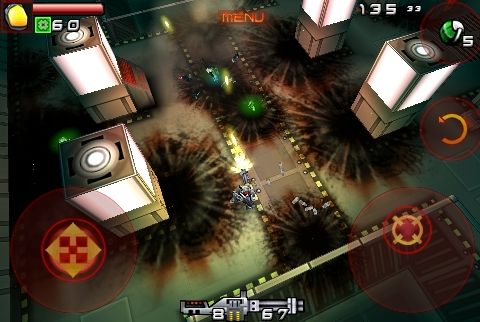 The build we were sent was a preview in every sense of the word, most of the art has yet to be finalized, menus are basic, and they haven’t added the story elements yet. However, as far as a beautiful framework for a dual stick shooter is concerned, these guys nailed it.

Check out the gameplay video which shows a bit of story mode and survival mode:

Survival mode is particularly interesting in Revolt, as you fight off enemies in waves and between each wave you’re given the opportunity to spend the credits you collect in game on ammo, grenades, and other goodies. I’ve spent a considerable amount of time trying to make it through the survival mode, and there seems to be an interesting layer of strategy in stocking up on weaponry. The easy levels obviously don’t require anything, but once you survive past the first few waves, grenades and other weapons become mandatory.

Revolt is still in development, but shows a considerable amount of promise. We’ll be keeping an eye on this game’s development, and if you want to know more, stop by the developer’s thread on our forums.