We sat down with the guys from The Binary Mill late Friday evening at GDC to check out their upcoming shooter, Assault Squadron. The most immediately noticeable feature about the game is the insane frame rate it all runs at, and the developers insist that it even runs at a solid 60 FPS even on the 1st generation iPod touch. These performance levels are important, especially as the game increases in difficulty and you find yourself in “bullet hell," as the developers put it. 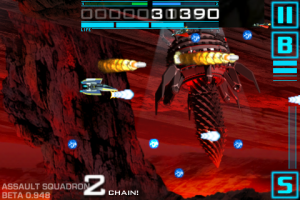 The twist of Assault Squadron comes from the two gameplay modes the various levels alternate between. While playing through the game, you’ll go through a level where it plays like a vertical shooter with your phone held in portrait mode. Following that, the game might alternate to a horizontal side scrolling level. With each transition you see different sides of both your ship and enemies, and the gameplay feels slightly different as well.

Other than that, Assault Squadron comes with everything you could possibly want in a shooter. There’s a crazy scoring system with multipliers galore (and online leaderboards via Crystal), four different ships that all handle differently with their own unique weapon systems, upgrades everywhere, and best yet– Control options that should satisfy everyone between the on-screen touch controls, a virtual joystick, and tilt.

Take a look at the recently release gameplay trailer:

The developers have mentioned they still have balancing a bug fixing to do, but hope to have Assault Squadron on the App Store sometime this spring. For more information on the game, take a look at the thread on our forums which is home to quite a ton of Assault Squadron media.