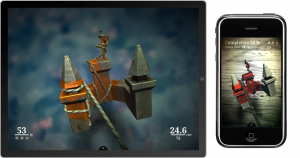 With the launch date of the iPad now set for April 3rd (wi-fi version) developers are gearing up to have games in the app store for you to download. Secret Exit was kind enough to send us an email with details about their upcoming Zen Bound 2, the sequel of their smash hit Zen Bound.

Earlier this year we posted screenshots of Zen Bound 2 running on a 3GS with very little details about the finished game. The new screenshots we were sent today only show the iPad. At this point it seems like they are focused on the iPad version for launch, with iPhone version possibly coming at a later date.

What we do is know, the new version will include upgraded versions of the levels in the last game and brand new levels with new kinds of gameplay. It will also include the same great sound track from Ghost Monkey with a few new songs thrown in. You can listen to one now on sound cloud.

They plan to have the game ready in time for the iPad launch in April. There has been a lot of discussion in our forums about this highly anticipated game.