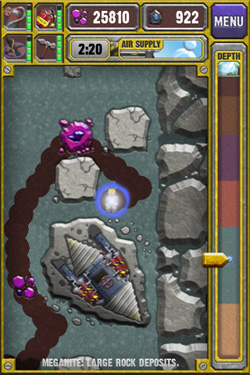 Do you have what it takes to help Mark the mole locate the elusive Terracore gem?  That’s the question, really, in Roo Games’ recent release Mole – Quest for the Terracore Gem! [App Store].

Mole is a game that, on the surface resembles classic Dig Dug, but is really a deeper game (sorry) that’s much more about scoring up in order to better equip your character than simple arcade action. In Mole, you start off as a rather ill-equipped Mark the mole that can’t do much beyond burrow about the top-most layer of the six-layer underground world that hides the fabled Terracore Gem (in the deepest layer, of course). While burrowing, you can pick up various precious metals and gems, and they can be used to up your gear in the equip shop — and better gear is what really opens up the game. It’s a gear-to-gameplay dynamic that’s reminiscent of that in Hook Champ.

The aforementioned shop offers air tanks, pick axes, gem detectors, and the like for the player with enough metal. All of them help you on your quest, but the most important upgrade would have to be the air tanks, for, despite the occasional pockets of air that can be found in some (but not all) of the underground layers, you’re not going to get very deep without some serious tankage. And the Terracore Gem lies deep.

The game offers very simplistic controls that work quite well; tap out some distance from your mole and he’ll move there or just hold and drag in the direction you want to travel. The arrangement of on-screen indicators can be adjusted for left or right players, as well.

This is one of those games that delivers just a really nice balance between light playfield strategy (how deep should you go with your limited oxygen supply?) and asset allocation (how best to spend money in the shop?). If break-neck arcade action is what you’re after, then Mole – Quest for the Terracore Gem! will disappoint, but for the gamer that can weigh risks and keep their eye on the goal, this one is a true hidden gem.

In honor of the Game Developers Conference 2010, Mole is free until Sunday, March 14th.