Earlier this month we took a look at IUGO’s amusing dual-stick survival shooter Daisy Mae’s Alien Buffet. We liked the game, which offers solid shooter action and, unlike most other games of the sort, an impressive ability to interaction with obstacles in the environment. The game has an atmosphere straight out of a B-movie and features an array of ridiculous weapons along with humorous taunts and unlockable outfits for the voluptuous Daisy, each smaller than the next. 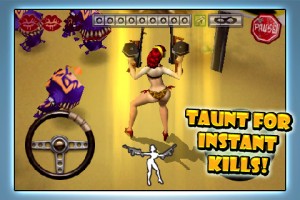 It all comes together to make for a fun romp of carnage, but that last seems to have stuck in Apple’s craw after recent changes to the company’s App Store approval policies. As IUGO informed readers in our forums, Daisy Mae has been pulled from the App Store.

And Daisy Mae isn’t the only one to get a tap on the shoulder. A great many adult-themed apps have been pulled from the App Store. One such app is Wobble iBoobs from ChilliFresh, who yesterday received an email from Apple indicating that their popular iPhone app had been pulled.

The App Store continues to evolve, and as such, we are constantly refining our guidelines. Your application, Wobble iBoobs (Premium Uncensored), contains content that we had originally believed to be suitable for distribution. However, we have recently received numerous complaints from our customers about this type of content, and have changed our guidelines appropriately.

We have decided to remove any overtly sexual content from the App Store, which includes your application.

Thank you for your understanding in this matter. If you believe you can make the necessary changes so that Wobble iBoobs (Premium Uncensored) complies with our recent changes, we encourage you to do so and resubmit for review.

And while a shooter with some risque elements would seem to not be in quite the same place as a “boob"-centric app, Daisy Mae seems to have found herself on the far side of Apple’s newly-adjusted line.

IUGO intends to rework the game and bring it back to the App Store, but indicates it’s unclear just how long that will take.