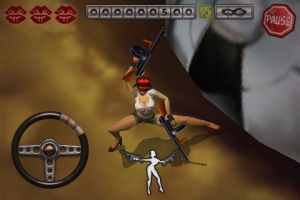 Late last month IUGO announced their new dual stick shooter, Daisy Mae’s Alien Buffet [App Store] which appeared for download not long ago. In the game you play as Daisy Mae, valiant heroine of a desert trailer park, who defends Earth from a never-ending swarm of aliens with nothing other than her good looks and guns… lots of guns.

The atmosphere of the game is straight out of a classic B-movie, with everything from the numerous ridiculous weapons, to the silly looking aliens, and Daisy Mae’s clothing which gets more and more skimpy as you unlock additional outfits. There whole game is even wrapped in a film grain filter that I think looks really cool but is easily disabled in the options if you don’t like it. 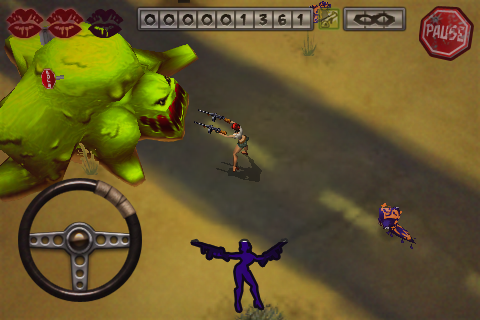 Gameplay is standard for a dual stick survival shooter. You have three lives, and can restore lost lives by picking up lipstick power-ups. As you kill more and more aliens, a meter fills in the bottom of the screen that you can tap to taunt nearby aliens, which apparently makes them drop dead. There are a bunch of different aliens to kill, and even some giant aliens which take up a huge chunk of the screen.

My favorite thing about Daisy Mae’s Alien Buffet is that it seems to be one of the few dual stick shooters that actually has collision detection with obstacles in the game world. You can use the old cars, signs, and random garbage strewn about to your advantage, and it really adds a lot more to the game compared to other dual stick shooters where you can usually just run in circles killing everything that’s chasing you.

Daisy Mae is certainly one of the more newbie-friendly shooters out there, thanks to the three control options it includes. Aside from the standard dual sticks you can just use one virtual joystick and a button to fire, or simply just use the virtual joystick and let the game handle firing for you. With this third control option the game basically plays itself, and you really don’t even have to move until the meaner aliens start spawning.

Daisy Mae’s Alien Buffet is a fun survival shooter with tons of weapons and a cool atmosphere to it. An in-depth stat tracking system keeps track of kills with each of the weapons, total play time, and numerous other stats. Scores are even seamlessly submitted online without needing to register, but like other IUGO games you can optionally participate in the IUGO VIP system. The taunts and unlockable outfits are equally ridiculous, but the addition of terrain collision detection easily makes Daisy Mae worth trying, even if your device is already loaded with other shooters.