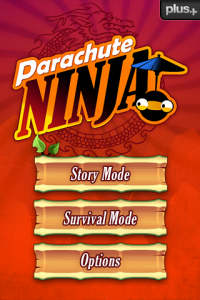 Freeverse’s Parachute Ninja [App Store] has been getting some much deserved positive first impressions in our forums since its release last night.

Parachute Ninja‘s story isn’t exactly the standout part of this game; some dude set your hut on fire so this weird little yellow guy with wicked eyebrows tells you that you need to put on some funny clothes and bounce around a 2D platforming-based world until a game over screen pops up. Something like that.

The core of Parachute Ninja‘s gameplay is based around launching a tiny, round ninja from little floating slingshots all around an area and using his parachute to float around the environment. Slinging the ninja from the vines that form the game’s slingshot/platforms works much like the slingshot mechanic from Bird Strike. Once in the air, touching anywhere on the screen will cause the ninja to whip out his tiny parachute, which will slow his fall and allow the player to control the direction of his descent by tilting the device. 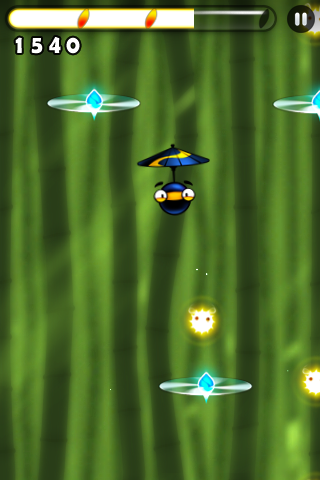 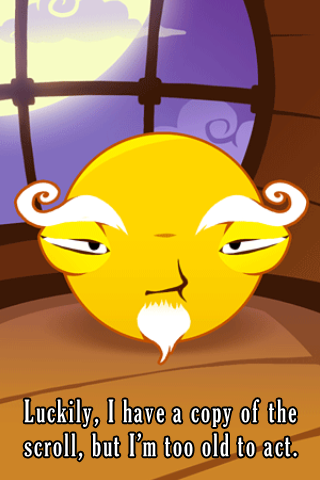 There are two modes in Parachute Ninja: Story mode and Survival mode. Story mode tests your little ninja with 30 levels in each of which the goal is to reach the exit while collecting as many fireflies (generic floating shiny things) as possible to get a high score. There is no time limit or penalty for taking a long time in these levels, and there is no way to “lose", as a fall into the always-rising (and yet completely unexplained) watery abyss will simply restart your character at the last checkpoint you touched and deduct a few points from your score. Levels are ranked using what is essentially a three-star system, with the highest award going to those who were able to rack up a huge score by collecting numerous fireflies within a short time period, creating a combo. High score chasers out there will be happy to hear that Plus+ has been integrated into the game, making scores and achievements fully featured and online. 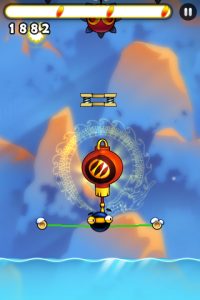 The second playable mode in Parachute Ninja, Survival mode, plays quite similarly to Doodle Jump. In this mode the goal is to get as high as possible while constantly being chased by a deadly wave of rising water. While the starting area of this mode is always the same, players who get higher up will start to discover that the obstacles and various items are all randomly generated, making Survival mode a part of the game that many people will find themselves returning to long after beating the Story mode.

There’s a decent amount of variety to Parachute Ninja‘s platforming mechanics due to the different types of platforms like trampolines, slingshots, fans, etc. The introduction of these new mechanics are spread out pretty evenly throughout the Story mode, so the game stays fresh for the whole ride.

The one gameplay element that I had some trouble with was the tilt-controlled movement of the parachute which auto-calibrates to the iPhone’s position when you tap on the screen. If you’re not paying close attention, this can result in some wild overcompensation due to the sensitive controls. In the end, I found using the parachute in quick short bursts worked much better.

After only a few minutes of playing Parachute Ninja, I knew I’d be writing a very positive review. The art style is cute, the gameplay is fun and well-suited to the iPhone, and the two modes are neatly packaged and make the game easy to look at and play. Parachute Ninja is an easy purchase.