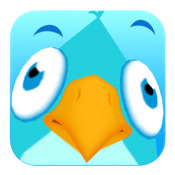 If you’re flying in a plane, bird strikes are bad. If you’re looking for a ridiculous game for your iPhone, Bird Strike [App Store] is great. Colorful art, good animations, and a silly gameplay premise all combine to make a game that I really doubt few people will be able to play without at least cracking a little bit of a smile.

Bird Strike begins with a tiny blue bird precariously perched on a power line. You drag your finger down to turn the power line in to a makeshift sling shot to send your bird soaring towards the heavens. During your flight, destroying objects, collecting seeds, how clean your flight is, and how high you fly all factor in to your score. Your bird is controlled by tilting, and on your way up you can jump on rockets to give you an extra boost.

When you run out of momentum, your bird flutters for a second, and falls back down. At this point you can either collect additional seeds you missed flying up, break any balloons you run in to, or try to catch another rocket to fly higher. After the first few levels you will come across a football helmet that can be picked up that will allow you to break through one obstacle without losing momentum. 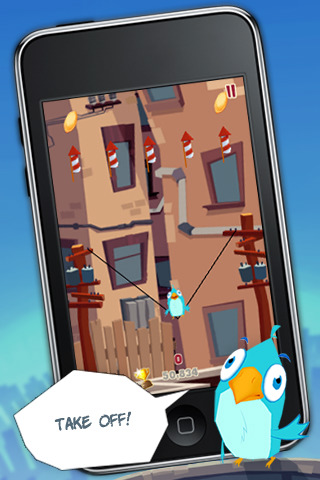 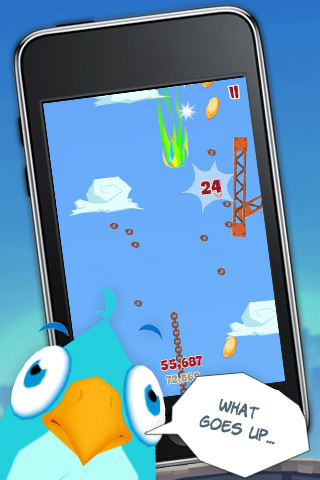 These obstacles include different types and sizes of balloons, Donkey Kong-style girders that are mysteriously floating in the air, various other types of birds, along with other things. Assuming you can make it all the way to the top of a level, a UFO hovering above you blasts you with an onboard ray gun, turning you in to some kind of green fireball– At which point the game tells you “break stuff".

On your way down, you blast through all the obstacles that caused you trouble as you flew up, and the more things you break the higher your score gets. This is extremely rewarding, especially when you absolutely decimate the series of girders that you kept hitting your head on while flying up.

All of these gameplay elements can be seen in the Bird Strike trailer:

Unfortunately, while the game itself is awesome, it does come with a few issues. First of all, there are no online leaderboards or achievements– Something the game practically is begging for considering all the achievements that could be worked in to the game such as collecting every rocket on a level, not destroying any obstacles, etc. The developer’s other games have OpenFeint, and according to a post on our forums, they’re thinking about adding it to Bird Strike.

Secondly, and far more annoying, is that the game doesn’t seem to prevent your phone from initiating its automatic screen lock. Since it’s a tilt controlled game, you rarely touch the screen aside from the level select process, and having to remember to move your thumb around every few seconds so the screen doesn’t turn off is a major oversight. Thankfully, fixing this involves little more than two lines of code to disable the device’s idle timer– PikPok is aware of the issue and it sounds like it will be quickly fixed in an update. In the meantime, you can disable auto-lock in your device settings, just be sure to remember to turn it back on.

If you’re able to overlook its flaws, Bird Strike is a ton of fun.