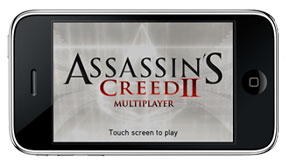 According to the Ubisoft web site, a new game that takes place in the Assassin’s Creed universe is coming soon, exclusively to the iPhone. Assassin’s Creed II: Multiplayer will utilize a WiFi connection to hunt down three other assassins online in some type of strange top-down stealth-oriented deathmatch.

Assassin’s Creed 2: Multiplayer, an exclusive game for iPhone & iPod touch and the first game in the series that allows you to compete against your friends.

The game is said to have three different environments that are all inspired by the italian cities of Assassin’s Creed II along with six different power-ups for players to utilize when mowing down their opponents. The feature listing also includes mention of a notoriety system, which sounds like a fancy online leaderboard of sorts, and of course, the game comes loaded with its own set of achievements.

Last month, news broke that Ubisoft had plans for a multiplayer Assassin’s Creed game and when we spoke with Assassin’s Creed II: Discovery producer Ben Mattes, he did say to expect some “super-cool content" coming in the following weeks and months, and it seems this is Ubisoft’s followup to that commitment.

Assassin’s Creed II: Multiplayer is “coming soon", and as soon as we have more details we will post them.