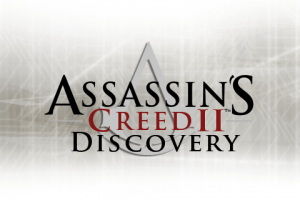 Assassins’s Creed 2 was extremely well-received on the PS3 and X360, numbering amongst the stand-out titles of 2009. It’s no surprise then that Ubisoft would want to strike while the iron is still hot, and capitalise on the popularity of the franchise. Assassin’s Creed 2: Discovery [App Store] is their (somewhat late) answer to that, but does it do justice to its bigger brother?

The Assassin’s Creed universe is undoubtedly one of the more unique intellectual properties to hit the gaming world, and offers a rich source of story and background to draw from. The iPhone off-shoot of Assassin’s Creed 2, as in the console version, focuses on the protagonist Ezio and his battle against the Templars throughout Italy and Spain. The story operates as an aside to that of the console storyline, and follows Ezio as he tracks down another threat to the Assassins; a hunt that takes him across the seas to Spain.

Assassin’s Creed 2: Discovery is essentially a 2D platformer that employs the Assassin’s formula of deception, agility and deadly force. There are a few types of missions to complete in Assassin’s Creed 2: Discovery; some which require stealth, where being discovered too many times will see you caught; others that throw Ezio into an acrobatic chase sequence; and those where Ezio must simply reach a predefined target. At the end of each level you are (quite ruthlessly) graded for the time you have taken and kills made, and awarded synch points which can then be used to unlock a number of “animus hacks", such as hard mode and a number of cheats. 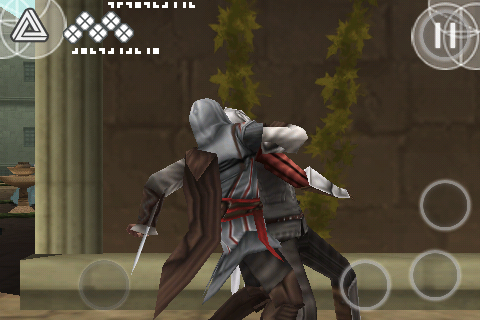 Ezio is controlled by a left and right slider dictating his walk/run speed and a number of context-sensitive thumb-buttons to control his aerial and combat abilities. Ezio has two speeds of movement: a stealthy creep and an all-out sprint; the latter of which is responsible for some concerns with Assassin’s Creed 2: Discovery.

In the first few missions the high speed at which Ezio runs simply means a few important leaps are missed, requiring you to traverse to the top of the level again, resulting in heavy hits to your time score. This would be fine if we were playing a Sonic-of-old where such speed is encouraged by the level design, but when the chase missions begin Ezio’s blazing speed will see you unwittingly running into guards, falling over blind jumps into deadly pits, or scaling walls when you intend to drop down them — failing the mission time and time again until you have memorized the level in its entirety. One of our early frustrations with the game was a lack of clear goals at the start of each mission, resulting in some excessive trial and error as you learn about the different types of levels.

Despite it being a 2D platformer, the levels are crafted in 3D, and the attention to detail in both the levels themselves and the characters that populate them is outstanding. The animations, particularly the many ‘kill’ and counter animations that Ezio performs, are terrifically life-like and a delight to watch; easily some of the best we’ve seen on the platform to date. The combat mechanics are simple but effective, utilising two buttons to attack and counter in order to dispatch your foes. In fact, if the game didn’t tie you so strictly to a timer in many levels, the combat itself may have presented a more enjoyable distraction, rather than something to be avoided.

Assassin’s Creed 2: Discovery features 8 memory blocks (read: missions), each comprising a few different sequences. There is a solid amount of content on offer here. While there are some things in Assassin’s Creed II that make the game feel like it could have been left in the oven a little bit longer, it’s still easily one of the better platformers on the App Store. Be forewarned that the performance on the 3G is rather lackluster, but the game is a visual treat on the 3GS and has a few enhancements (graphics, audio, extras) over the DS version.