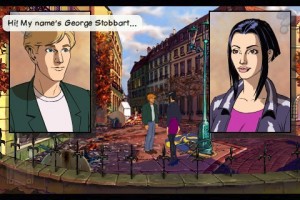 From Revolution Software, the same people who brought the iPhone the fantastic remake of Beneath a Steel Sky, comes Broken Sword: Shadow of the Templars: The Director’s Cut [$6.99], a remake of a point-and-click adventure from ’96 that many consider to be one of the greatest games within its genre. As we covered in our preview two different versions of this remake were already published on the DS and Wii in March of 2009, and the new iPhone version is a bit of a mixture of the two, adding full voice acting and other features that the DS version lacked.

Broken Sword, which was renamed Circle of Blood for its release in the USA, has been given a significant facelift. Whereas the original version of the game focused almost solely on the male character, George Stobbart, The Director’s Cut does a better job of fleshing out the back story of the game’s female protagonist, Nicole Collard. The game opens as Nicole prepares for an interview that unexpectedly becomes a murder investigation when the man she was set to interview is shot by a mysterious mime. Other modifications to the game include new puzzles that are specific to the iPhone platform and new art and animation from Dave Gibbons, who you might be familiar with through his work on Watchmen. 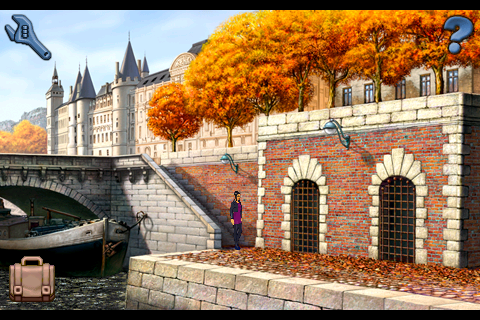 The story in Broken Sword, as in most point-and-click adventure games, is the most important element of the game, so those who haven’t played a version of the game before will be pleased to find that Broken Sword‘s writing is excellent, and the story is quite gripping. I particularly enjoyed the self-depreciating sense of humor that Nicole occasionally displays with her commentary, and George is a comedic parody of an American from a European perspective, making him a fairly amusing character as well. 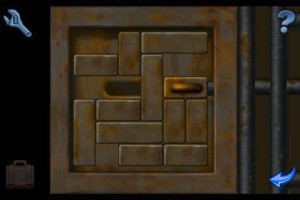 For a point-and-click adventure, Broken Sword does a lot to make itself easily accessible. In an intelligent move by the developers, a simple finger swipe will reveal everything that George or Nicole can interact within a single screen, preventing players from having to poke around the screen randomly until they find something that they can interact with. The game’s many puzzles range from brain games wherein an abstract combination of collected items must be used to progress to a lock-picking game that’s nearly identical to the iPhone’s own Blocked to a ridiculously complex cypher that players must harness incredible code-breaking skills to crack.

Luckily, the game has a built-in walkthrough in the form of a hint system that can be easily accessed if players want to give up and find the answer to a puzzle. For each puzzle there are several hints, each one more explicit than the last, with the last one usually being a straight-up answer to the puzzle for players who just couldn’t figure things out. The genius of both the “swipe-to-reveal" mechanic and the hint system is that it’s possible to never use either if a player doesn’t want to. Some of the hardcore fans of the original PC version of the game that’re picking up the iPhone version will want a more “pure" experience, and that option is available to them, but softies like myself can still enjoy the game without having to resort to an online walkthrough.

Broken Sword‘s creative touch interface works like a charm on the iPhone screen, but it was the one-two punch of the game’s fantastic soundtrack and art that really hooked me. The piano-heavy orchestral soundtrack is so good that I purchased it from the iTunes store so I could listen to it later, and the fact that every line of dialogue in the game is voiced makes this a game that must be experienced with headphones. Dave Gibbon’s contribution to the art and animation was an invaluable addition, as the painted backgrounds and the fluid animation adds a certain appealing touch to the game.

Even though I’ve never been a huge fan of point-and-click adventure games, the story and all around high-quality production values of Broken Sword sucked me in like a good book. Whether you’re an old fan of the original game, a newcomer to the series, or even someone who’s never played a point-and-click adventure before, Broken Sword is a game with mass appeal that will draw you in.