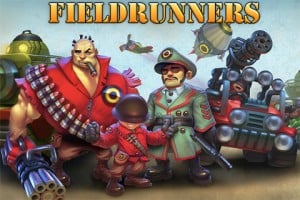 At PAX this year we first got word that there was a Fieldrunners [App Store] update in the works with additional maps which was later confirmed along with the announcement of OpenFeint gold. Available now, Fieldrunners 1.3 includes everything we expected with both the latest and greatest of OpenFeint integration, and two new maps available via two 99¢ microtransactions.

OpenFeint 2.4 adds even more XBOX Live-style features, and should be available in other OpenFeint-enabled games as developers update them to include it. Among the improvements is an instant messaging service that works across all OpenFeint games similar to the previously implemented chat, a new forum system, and the “fan club" area. In this new section you can add a game as a favorite, read developer announcements, subscribe to newsletters, and even suggest new features. 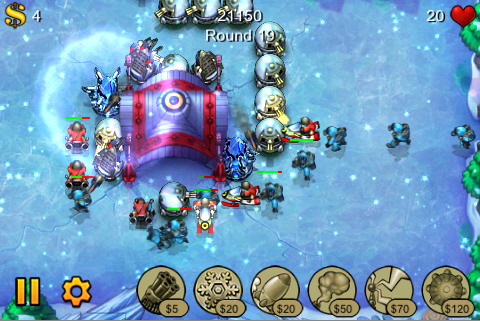 Fieldrunners itself seems to be largely unchanged aside from two new maps: Skyway and Frostbite. Skyway is an interesting map with chunks of the field missing that prevent towers being built in various locations. Building a maze of towers with these restrictions to effectively survive seems to be fairly difficult so far.

In Frostbite, you defend a central base from attackers that come from multiple directions, forcing you to spread your defenses dangerously thin to cover all of the entrances until you are able to build a good array of towers to funnel creeps around. Frostbite also features a neat snow effect which doesn’t do much aside from look cool.

Both maps include new enemies and tower types, and have done a great job at breathing new life in to Fieldrunners, a game I spent a great deal of time with when it was first released. If you’re like me and haven’t had Fieldrunners on your iPhone in ages, it’s worth re-syncing it and giving the new maps a shot.

If this is the first you’ve heard of Fieldrunners, check out our review from 2008. Fieldrunners is practically a classic in the overloaded tower defense section of the App Store, and is worth a look if you enjoy open-field tower defense games.