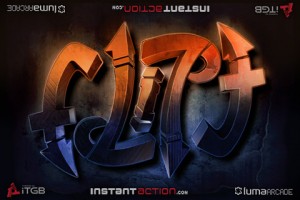 Flipt [App Store] brings to the iPhone a game in the fashion of the wildly popular flash game, Shift, but vastly improves on the formula.

Flipt is a puzzle game where you take control of your character in his or her attempt to reach the final door, and do so on the correct axis to enter it. This is essentially Flipt’s trump card– the ability to vertically flip the game world by simply rotating your device, completely setting the world on its head and making what was original underfoot now traversable. Additional elements in the game further the depth of its puzzles; with explodable boxes, gravity switches, moveable platforms and hazardous spikes all needing to be accounted for in your efforts to reach the end. The more mainstay of these, the gravity switches, are included in almost every level, rotating the game world in any of four compass points and doubling the axes to wrap your head around. 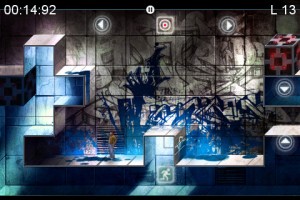 The world in Flipt could be lifted straight from a cyberpunk novel; every grungy surface and eerie blue or red light detailed on a terrific industrial backdrop. The sound in Flipt is a hot and cold affair, though always to an exceptional, crystal clear standard. It is unfortunate that the interesting and diverse ambient sounds evident throughout the first few levels are soon overrided by a droning factory clamour that while appealing at first, soon grates to beyond frustration. Fortunately, these can be quietened or turned off altogether.

The movement controls, though separate from the rotational mechanism, are handled with the same care and fine-tuning. Holding your thumb to the left or right of your character, regardless of the device’s orientation, will move the character left or right. Jumping is achieved by pressing the other thumb at the same time, rounding out a hassle-free control system that is accurate and straight forward.

There are 20 puzzles to work through in Flipt, which should take you about an hour or so to complete all up (unless you get really stuck). There are reasons to come back to each level however, as your fastest game completion time is recorded, and the top 10 global results appear in the rankings menu. Upon completing the game you are given the option of unlocking an additional character, which while nice, appears to be purely cosmetic. A Time Trial mode is also unlocked once you complete all 20 levels, which allows you to play each level individually to record and perfect your time. It is unfortunate that the global rankings do not also extend to the Time Trial levels; an oversight by the developer that could have added to the game.

Flipt is a high quality platform puzzle game that shows off the breadth of the iPhone’s touch and tilt controls. The puzzles are challenging but never frustrating, and it is a delight to behold how clever many of the levels actually are once you have solved them.