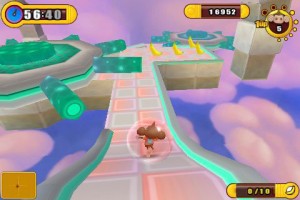 With its monkey rolling, twitch-balancing action, the Monkey Ball series seems like an easy sell on the iPhone. Despite stemming from a console franchise that’s been around for nearly a decade, the concept almost feels like it was grown specifically for the iPhone. If anything, this was a series that was waiting for the right platform to come along. But when Super Monkey Ball was released alongside the AppStore launch last summer, the results were anything but super. The controls were poorly executed and the visuals felt like a hand-me-down from the days when 16 bit gaming was trying to step out of 2D – the whole experience just wasn’t up to par. Now, 18 months later, Sega gets much closer to delivering the Monkey Ball game that everybody wants.

The objective in Super Monkey Ball 2 (like all games in the series) is to guide a monkey who is trapped in a ball to an exit without letting him roll off the playing field. You’ll navigate a variety of wild and well designed environments all the while using the power of tilt to control the ball. The game relies heavily on the concept of momentum, so you’ll need to make sure that you’re always moving at a controllable speed so that you can navigate the treacherous terrain laid before you. 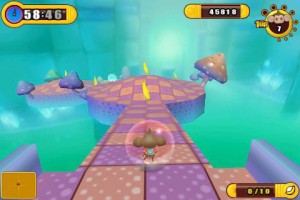 Super Monkey Ball 2, while far from perfect, is leaps and bounds better than its predecessor. Visually the game has stepped boldly into the world of 3D graphics, looking a fair bit like the Gamecube games that paved the way for the series success. Both the main characters and the environments look completely up to what you’d seen in its home console brethren. Considering the last game felt less like a modern portable and more like the bonus stage from Sonic 2, this is a massive and welcome improvement.

While stepped-up visuals are nice, the real sticking point with the series previous entry was the controls. The game sees a major improvement here as well, but it’s still far from perfect. The good news is you’ll never have a problem telling your monkey where to roll anymore. The bad news? You can’t set your default position for the tilt and you can’t control tilt sensitivity. To keep your monkey perfectly still you’ll need to hold your iPhone at about 10 degrees from a perfectly upright position. That means you’ll need to prop your iPhone directly in front of your face if you want to control your amiable ape without much difficulty. Those of us who don’t want to look like schmucks while rolling our monkeys around on the bus are completely out of luck, as holding the iPhone near your lap is really going to ramp up how difficult it is to get a handle on your monkey. 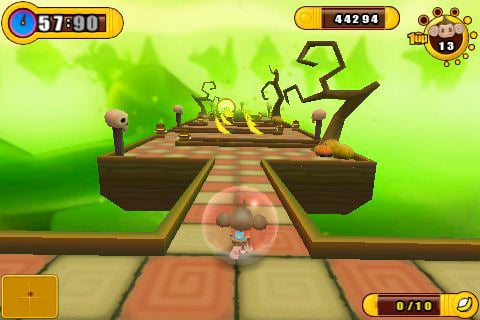 The lack of a tilt sensitivity adjustment definitely came across as an annoyance as well. Sure anyone can adjust to what’s offered in terms of tilting, but I found that sensitivity was just far too touchy for my liking. I had to make extra tiny delicate little moves to control my simian without bowling him clear off the playing field. As a big, brutish, relatively careless gamer, the forced precision seemed a little excessive. Tilt sensitivity controls would have fixed all of that.

Despite these annoyances, the controls still feel far more responsive than what we experienced in Monkey Ball’s first iPhone outing. This time around the controls are manageable and anyone can adapt to what’s on the table.

The game has seen other improvements as well. Mini-games have always been a staple of the franchise, but they were conspicuously absent from the previous endeavour. This time around the game features Monkey Bowling – a complete bowling game where you roll your monkey ball instead of the traditional three-holed variety. Two other mini-games – Monkey Golf and Monkey Target – have placeholder spots in the menu with big “coming soon” messages attached. It’s a shame that the content wasn’t included at launch, but at least we know more is on the way.

Multiplayer is also a welcome addition, supporting up to 4 players over local wifi. The multiplayer offering isn’t incredibly deep – you can race against friends to complete each level in record time and play mini-games together – but that doesn’t keep it from being a nice bonus to players seeking a party experience. If anything, it’s what games like Monkey Bowling were made for.

Monkey Ball fans are going to be delighted by the improvements here, but it’s hard to deny that Super Monkey Ball 2 is far from perfect. Should Sega decide to introduce some tilt adjusting options when they release the extra mini-games, Super Monkey Ball 2 would be a much easier offering to recommend. In the meantime, I still found it just a little too twitchy and sensitive to keeps the waves of frustration at bay.