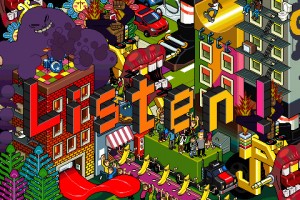 We’ve all played music games before; Guitar Hero and Rock Band have eaten up a lot of my time cumulatively over the past couple of years, so reading and reacting to the scrolling note tracks in those games has almost become a purely mechanical muscle reaction at this point. Even if there was no music playing audibly I could probably score 90% or above on most songs on even the hardest difficulties because my brain is reacting to the note tracks on a visual level, not an audible one.

Beat It! [App Store], a music-based game from Glu Games Inc, is different from other music games, not only in the way that it presents its music for interactive play, but in the way that players’ brains must function in order to be successful. Instead of playing along with a predetermined song, players are asked to recreate a short, looping beat that is played for them several times in quick succession before the beginning of each level. 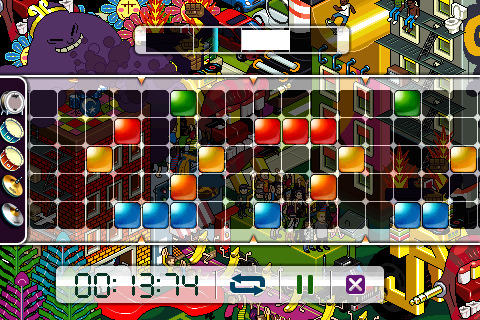 Once engaged in a level, players are handed a grid of squares in which each horizontal line represents potential note locations for a given instrument, which is shown on the left of the grid at equal height to its corresponding track. Tapping any square in the grid will place one singular note played from the given instrument at that point in the beat sequence, and notes are played in order from left to right as a blue line sweeps across the note grid at a persistent rate and passes over them.

This all sounds very confusing, but it’s actually pretty simple and easy to deal with right from the start, so long as you’re listening to the beats carefully. The rate at which difficulty ramps up over the course of the game’s 50 levels (which you’ll play through chronologically in the career mode) is absolutely perfect. New concepts are dealt out at a quick but manageable pace so that your brain will be consistently stretching just enough to really get the juices flowing without the levels becoming frustratingly difficult.

At any point in a level, players can touch an icon at the bottom of the screen to hear the target beat track played for them again, and they’ll receive slight visual cues from the previously mentioned blue line to help determine where exactly notes should go. This helps a lot, but doesn’t make the game overly easy, as the meat of the game is all about improving your completion times in levels. There is no way to fail, but taking longer means that less points are earned at the end of each level so you’ll have an incentive to go back and improve your time. 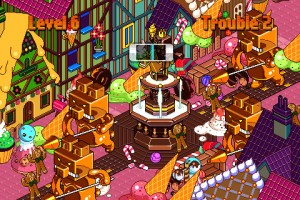 All of this beat-matching gameplay is made so very much sweeter by the retro pixel-art backgrounds and animations that differ from level to level. This isn’t your dad’s pixel art, as the camera showing various animated pixel-art locations is pulled way back, making for a view of an entire 16-bit city block. This is probably the best looking pixel-art that I’ve ever seen, and I say that as a huge fan of retro consoles.

New instruments are unlocked as the game progresses, making for a total of four complete instrument sets, each of which contains about six instruments. All of these instruments can be used in free play mode, where players are free to experiment with creating their own beats and note tracks. It’s possible to save your note tracks, and while you’re not all that likely to make anything especially awesome, free play mode is definitely a fun, worthy edition to the overall package, providing a lot of potential for players to squeeze some extra hours of fun out of their copy.

Having to mentally separate out each individual instrument and determine its tempo requires the firing of neurons that most people’s brains never access, and the intense use of these neurons improves their effectiveness extremely quickly. Within about an hour of first picking the game up I was able to simultaneously pay full attention to two instrument tracks at once, immediately figuring out both of their full sets of note locations.

Even if it doesn’t have the same brain-stimulating effect on other people that it had on me, the game is a game worth playing for everyone, not just those who are already fans of music games like Guitar Hero. Beat It! is a delight to play, and a true brain-teasing, unique experience.