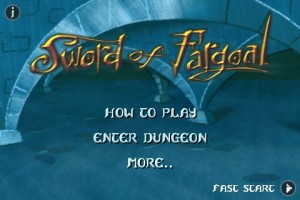 A week back, we posted an exclusive preview of the upcoming iPhone remake of Jeff McCord’s classic ’80s dungeon-crawler, Sword of Fargoal. This weekend I had the opportunity to interview Jeff along with his partners in crime on this project, Paul Pridham (who brought us Saucelifter) and Elias Pschernig, about their imminent release. (An edit of the IRC-based interview with the three can be seen after the jump.)

Along with the interview, Jeff has posted the first in a series of in-depth gameplay videos that should give gamers a very good sense of what the game is all about.

In a nutshell, the Sword of Fargoal places the player within the top level of a deep series of dungeons with the quest of seeking out the legendary “Sword of Fargoal" and escaping with it from the depths of said dungeons. Complicating matters is the fact that the layout of each dungeon level is randomly generated when the player enters it, and that the dungeons are all initially bathed in darkness, revealing themselves only as the player explores. Those lucky enough to locate the sword have only 2,000 seconds to find their way out of the dungeons which, even on the way up, are randomly generated…. Not a proposition for the meek.

I’ve spent some real time with pre-release builds of Sword of Fargoal of late and have really been enjoying the game so far.  As I mentioned in our preview story, the iPhone adaptation of this classic is rich on gameplay but a bit more casual in some respects than the typical roguelike, making it nicely approachable to those who have  found other games of the sort a bit too “hardcore."

If you’ve ever wanted to make a treacherous journey deep into the heart of a dungeon full of all manner of ghastly creatures, now’s your chance — or soon, anyway. Sword of Fargoal has just been submitted to the App Store and should be available by mid-December at an introductory price of $2.99 (regular $4.99).

Read on for the interview with Jeff, Paul, and Elias.

TouchArcade: So the first Sword of Fargoal was made for the PET in 1980 or so. What was your inspiration for that Jeff? D&D or a specific computer game, etc.?

Jeff McCord: I was lucky enough to have had my father as a professor at the University of Kentucky (Lexington)… And he gave me a student account at the computer center. I played Adventure until I could beat it! I could type about 200 lines ahead on the TTY teminals, trying to get past each stage where I failed! So I would say that Adventure was my biggest influence!

TouchArcade: So did you have a PET at home or was the VIC-20 your first Commodore?

Jeff McCord: The PET. Again, my dad. He had the forethought to bring one of the first personal computers into the house. Couldn’t keep me off it!

TouchArcade: And you went commercial on the VIC-20, in BASIC, with Epyx?

Jeff McCord: Yeah. That was the first “release." The VIC-20 version probably got hacked a lot!

Paul Pridham: Jeff had put in some list-prevention. I remember seeing that when I tried to hack it myself 🙂 (back when I was 11 or so)

Jeff McCord: I had figured out some sort of copy-protection scheme in the later C64 version — can’t remember what it was… My understanding is that, though I sold over 30,000 copies, there were probably 5 to 10 times that many copies in circulation. It was VERY MUCH like the iPhone is today, market-wise!

TouchArcade: It was Epyx’s commercial release of Atari ST Rogue that was my first exposure to the genre, really. I also spent some time with the roguelike Sword of Kadash, that I think Epyx put out as well.

Jeff McCord: Yeah. I think Epyx did some games “inspired" by Sword of Fargoal and Rogue long after I left.

TouchArcade: Ok, so — then comes Paul and he with friends did a “surprise" port of Sword of Fargoal for PC (Mac?)…

Paul Pridham: PC initially (and Linux). Yes, I emailed Jeff about the game.

Jeff McCord: Yes I had to give them a little “copyright" scolding but I think it was amazing what they (Paul and Elias) had done

TouchArcade: Ok so what is it that prompted the iPhone remake?

Jeff McCord: So the iPhone update: We really wanted to “re-invent" the game for a modern audience while also appealing to its RPG past. And we talked about it, even before the iPhone was out, when the iPhone was but a twinkle in Steve Jobs’ eye.

TouchArcade: So, is Paul the sole coder on this, or are you (Elias and Jeff) also contributing actual code?

Paul Pridham: Elias and I both code it. Jeff does emotional support. I mean…he’s done some nice artwork! And lots of great marketing. And Jeff and I pretty much wrestle over game design on a daily basis.

Paul Pridham: iPhone Sword of Fargoal is written in plain old C, with a lot of great contributions from Elias.

Jeff McCord: “Fog" for example (a critical part of the game).

Paul Pridham: Elias LOVES working on the fog. He dreams about it.

Jeff McCord: He was probably dreaming about fog when we were looking for him.

TouchArcade: So is the fog final?

Jeff McCord: The “fog" effect was what made Fargoal special from the beginning. My understanding was that it influenced others to come.

Paul Pridham: We might overhaul the fog later, we’ll have to see. Ideally we’d have a roiling, seamless sort of effect to it.

TouchArcade: And so, you say free play updates will come down the road, but there will be paid DLC for tilesets. Got any of those done yet?

Paul Pridham: Well, one will be an adaptation of the classic C64 and VIC-20 sets.

Paul Pridham: Well initially… Our very first port was SLOW. That was the first thing I’d built on iPhone at all But, after what I learned from Saucelifter, and once Elias got on board, we were able to iron out performance issues fairly quickly.

TouchArcade: Does the game play very differently from 1G touch to 3G touch?

TouchArcade: Tell me more about the Fargoal iPhone music synth. It sounds awesome. Retro but superb.

Paul Pridham: There’s the music, and that’s fully composed orchestral etc. stuff by Daniel Pemberton. Then, the “riffs" when you initiate combat, win, get an item, etc. Those are actually WAVs of the original C64 riffs.

TouchArcade: And the synth is more advanced than a SID?

Paul Pridham: Yes. It’s fully modular. I will be using it in all of my future projects. Also, my next project will be a music app Like Melodica, etc. but with the synth exposed.

Jeff McCord: It is an odd thing, Blake, walking that fine line between modern and “retro." One thing for sure, our playtesters are telling us that we have hit a good balance between retro and current.

TouchArcade: I think people will be quite pleased, overall.

Paul Pridham: I wish I had more time for the initial release, but the next update should be very nice too.