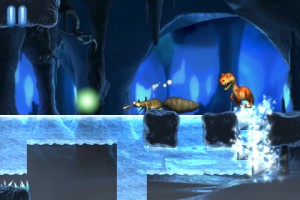 Movie tie-ins have long been cautiously received by gamers, owing to the dearth of quality games based on such popular licences in the past. It is fortunate however that Ice Age: Dawn of the Dinosaurs [App Store] has placed its well-known pre-historic characters and setting in the capable hands of Two Tribes, known best for Toki Tori which we thoroughly enjoyed.

Two Tribes has created of the movie licence a puzzle platformer in the same vein as Toki Tori; the player assuming control of the cute-but-accident-prone Scrat, a sabre-toothed squirrel on a tireless quest for the greatest acorn he has ever laid his eyes on.

Puzzles essentially take the form of block pulling and pushing to navigate Scrat through treacherous terrain. There are 36 levels in Ice Age: Dawn of the Dinosaurs spanning four individually themed chapters that present their own obstacles and mechanics to help and hinder Scrat in his journey. Puzzles involve breaking and sliding ice blocks, floating bubbles and toxic gases, nasty spikes and lava pits, together with a range of hostile dinosaurs to avoid that would love nothing more than to make Scrat dinner. This only scrapes the surface of what Scrat will need to interact with to rescue his dream acorn; puzzle elements being continually added to as the levels progress. 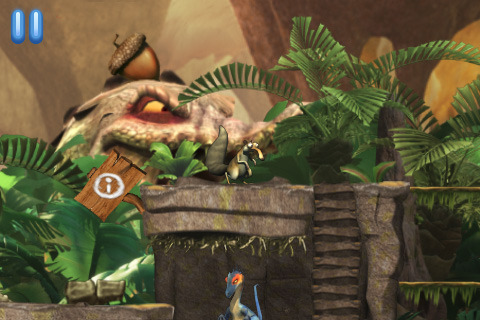 Similarly (and fortunately), the controls in Ice Age: Dawn of the Dinosaurs borrow heavily from Toki Tori, a simple tap will see Scrat take the shortest path to reach the desired location. This makes complex actions such as climbing a number of ladders quickly and directing near-bursting bubbles through the air effortless, ensuring the difficulty lies not in the controls but in correctly solving the puzzle at hand. There are no limit to retries and checkpoints are frequent and unobtrusive, rewarding you with a save point after each puzzle is solved.

This is particularly important seeing as how the levels in Ice Age: Dawn of the Dinosaurs are quite long, much longer than your average Toki Tori level; platforms often span a number of screens in various directions. Subsequently, there are a number of hours to be had working through the often mind-numbing puzzles for even puzzle geniuses out there; far more hours undoubtedly necessary for the everyday gamer. To achieve 100% completion and collect each level’s many smaller acorns will likely consume many waking hours for those eager do so, a feat rewarded with the unlocking of a final, Expert level.

Ice Age: Dawn of the Dinosaurs boasts an outstanding all-round presentation; the graphics gorgeously rendered and animated, with some of the larger, more recognizable dinosaurs from the movies providing some additional visual treats. The music and sounds accompanying each level are of a similarly excellent quality.