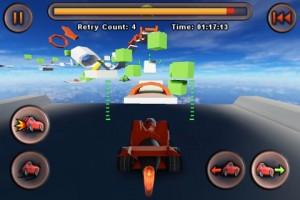 True Axis’ Jet Car Stunts [App Store] has been eagerly anticipated here at Touch Arcade, largely due to impressive previews of its stylish, uniquely crafted game world in which to soar around. Now that we have it in our hands, it is safe to say that our excitement for this game was not remiss: Jet Car Stunts has really set the bar high in both visual appeal and handling.

As explained by the developers in our earlier interview, the clean-lined track design is created by a flat-shading of solid colors that really draw the eye to the engine’s pre-calculated lightmaps. Each of the tracks are set over detailed, eye-catching skymaps that act as contrasting backdrops- the effect culminating in one particular level with a breathtaking sunset casting shadows all over the race track. The developers have previously stated in our forums that as well as looking terrific, this design has allowed them to achieve an impressive 60 frames per second on 3rd generation devices, and a smooth 30 fps on all previous models. 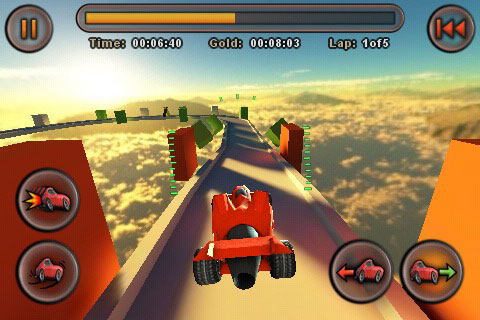 All the visuals in the world however cannot sustain a lacking gameplay design or frustrating controls; two unfortunately common traits of many AppStore releases. Fortunately, Jet Car Stunts sports neither, its simple name belying a surprisingly feature and content-rich racer. There are two markedly different gameplay experiences to be had in Jet Car Stunts; a Platforming mode and a Time Trial mode, with 36 individually crafted tracks to complete between the two.

Platforming mode sees you carefully managing your rocket boost and brake-flaps to perfectly land mind-boggling jumps and death-defying drops. There are 25 tracks to master here, ranging in difficulty from ‘Just learning’ to ‘Impossible’, the latter of which is very true to its name. Platforming, and to a lesser extent, Time Trial mode too, is not something that you will expect to complete on your first or even fifth attempt. To pass each level you must complete the track without retrying more than 10 times. That may sound lenient, but Jet Car Stunts sees you careening off-course at blistering speeds more often than not, until you’re adequately familiar with each turn and have gauged each jump. Fortunately, there are regular checkpoints throughout each level that make each new feat manageable and prevent the game from ever getting frustrating. 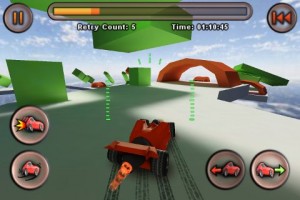 Time Trial mode presents 11 tracks of lesser vertical challenge, but which are far more capable of maxing out the speed potential of your jet car. Checkpoints award a much needed time bonus and boost recharge as you wildly drift and rocket your jet car around precarious bends and stomach-wrenching leaps to complete each lap. It’s pleasing to see a racer capable of two very different yet still exciting game play approaches.

Considering the break-neck pace at which Jet Car Stunts is played, it is a credit to the developers that they have managed to fine tuned the accelerometer steering. Acceleration and braking is controlled separately from the boosting and brake-flaps, meaning four buttons must be considered at all times. When in the air, tilting the device up or down alters the pitch of the jet car to achieve desired distance and trajectory, whilst left and right tilting affect the roll of the vehicle. Proper use of air-braking and tilting is critical for success especially in the Platforming levels. Though every now and then you may find your jet car the wrong way up, you never feel as if it is a result of the game controls, but simply due to the need for extra practice with the track. It is also worth noting that there are a variety of different on-screen button configurations available depending on your personal preference.

In addition to all this, Jet Car Stunts boasts OpenFeint integration, with 39 achievements to unlock; gained through feats such as somersaulting, barrel rolling and spinning your jet car, as well as through mastering each track on offer. Online leaderboards for each track in both Platforming and Time Trial will see that the competitive types continue to play Jet Car Stunts for a long while to come. For those simply interested in completing Jet Car Stunts, the time needed to memorize and master the 36 tracks available will certinaly be satisfactory.

All in all, we’ve been having a great time with this game and highly recommend it. Early impressions pouring in from readers in our discussions forums are also overwhelmingly positive. If you are vaguely interested in a challenging rocket-paced racer with attractive and crafty level designs then you owe it to yourself to check out the break-neck paced racing and fresh visual design of Jet Car Stunts.