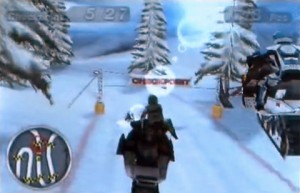 Resolution Interactive, who brought us the enjoyable iPhone racing titles Dirt Moto Racing and Aqua Moto Racing, has announced that they will soon be bringing the first iPhone snowmobile racer, Snow Moto Racing, to the App Store.

Experience the thrill of high-speed snowmobile racing while carving your path through beautiful winter landscapes.

Perform stunts to trigger speed boosts that will give you the edge when racing against your opponents.

Challenge your friends and race head-to-head for glory in the new multiplayer mode with up to 4 players.

See Resolution’s preview video for a look at the game in play.

We here at Touch Arcade are fans of Resolution’s earlier Moto racing installments and are anxious to get our hands on this upcoming release.  We’ll take a closer look when the game goes live in the App Store.

Snow Moto Racing has been submitted to Apple for approval and will launch at a price of $0.99.